Hello again! This week I've got another completed crew to show, Tara's Herald of Obliteration crew. As mentioned last week, this is the special edition transparent 'smoke' plastic set that Wyrd first sold at GenCon a few years back (one which I didn't attend) and some holiday specials since. As this was my first time working with this type of material I did research and testing on my own on how to best approach it. Plastic cement unfortunately doesn't work. Superglue does, but it fogs the clear plastic. The best adhesive was said to be clear canopy glue mainly used for windows on scale model planes and cars. I picked up a bottle to test out, but the instructions said to tape the pieces in place and then wait 3 hours... I'm not that patient and that had me questioning the durability of the bond for gaming pieces. So I just used superglue to stick everything together. It did indeed fog around the application area, but since I planned on green-stuffing and painting over the seams anyway, it was acceptable for my purposes. 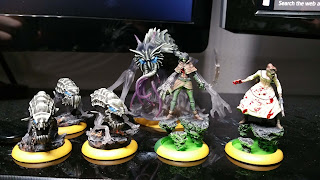 I wanted to leave large portions of the Nothing Beast and Void Wretches transparent to reflect their otherworldliness. I started with a thin layer of rattle can matte varnish over the bare plastic. This would act as a sort of primer for the areas I wanted to paint traditionally as nothing was going to stick to the bare super slick surface. It also gives a neat frosted effect. Most of the models have hollow cavities inside which aren't attractive to look at and there were surface scratches from scraping off the mold lines (which are really hard to find on clear plastic, by the way). The matte coat conveniently hides all of these imperfections and gives more depth to the surface. 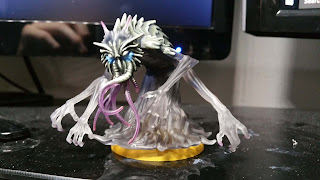 The Void Wretches were done up in much the same way as the Beast. I had seen others use a wash on clear plastic for depth so I tried that on the middle Wretch's legs. But the combination of matte coat and wash all but eliminated the transparent look. I did try a wash on the bare plastic before the varnish as well, but nothing stuck and I just ended up with nasty looking pools in the recesses. They must have used a much clearer varnish to give the wash some tooth to grab on to. 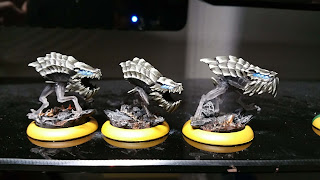 Tara and Karina had much less surface area I wanted to leave unpainted and thus mask off with tape. Tara's monster arm and sword were good candidates but I wanted to fully paint Karina. I went through a couple of basing options for these two. I started out with Micro Art Studio 'Chaos' bases for the whole crew, but wasn't happy with how they painted up. My initial plan was to have an OSL effect coming from between the cracks in the rocks, but the glow on the models would have covered up the transparency. I stuck with the chaos bases for the Wretches, but for the humanoids I switched over to custom bases of floating stone inspired by other's work posted in Wyrd's forums. 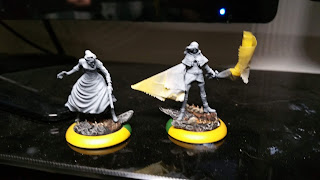 The rocks are just small pieces of cork board superglued together with chunks of the edges torn off with pliers to blend the horizontal slabs of cork together. 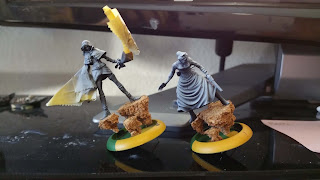 After painting up the minis I gave them each a light airbrush of green from below as a quick glow effect, leaving masking on the pieces I wanted to stay clear, as I imagine ethereal bits wouldn't reflect light all that well. 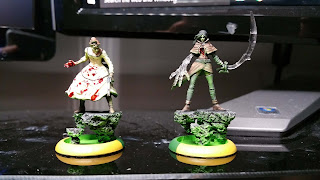 Beyond completing Tara's crew. I've been on an assembly binge. I put together and based my remaining Outcast minis and also decided on basing for my already assembled Yan Lo crew. Outcasts got a simple rocks+sand scheme (with some post-painting bushes/grass to follow), whereas Yan Lo got fancier treatment with Micro Art Studio 'Ancient' bases. 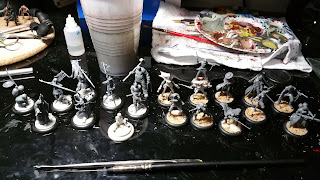 All were then zenithal primed: black primer all over with a top-down spray of white, out to about 45 degrees. 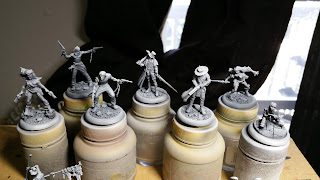 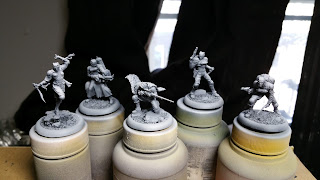 Batch 3: Yan Lo and a Lone Swordsman. I had already assembled Yan Lo's crew box (with superglue rather than plastic cement unfortunately, so I had to green stuff some seams), but hadn't yet based or primed them. 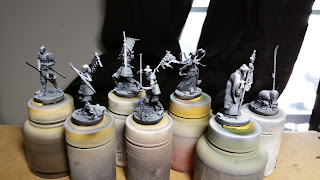 Finished up with assembly of Jack Daw's crew and a pair of Hanged who got my remaining 'Ancient' bases, but have not yet been primed. 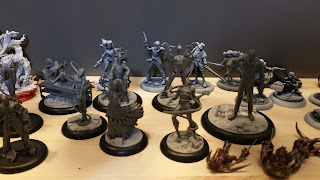 That's all for this update. Just want to wrap up by saying how awesome plastic cement is! Back when I started hobbying all I used as superglue. After dealing with the fragility and messiness (always had scales of glue to pick off of my fingertips) I finally switched over to the good stuff. Aside from the rock-solid bond between the parts, it nearly eliminates the need for any green stuffing to hide joints, something I loath doing. Simply squish the melted plastic into the crevice and scrape any excess of with a knife after it dries for a perfect, clean seam.
Posted by Unknown at 11:19 PM 1 comment: