The Joker, Nightcrawler, a Game with Deadly Animals, and a KantCon Dragon!

HAHAHAHAHAHA!!!  I'm back with another mega-post update and leading off with some of my latest projects.  This one is the Killing Joke, an iconic scene in the DC universe where Robin dies and the Joker gets his face ripped off.  Dark stuff and one cool mini to paint.  This mini is quite a bit larger than your ordinary 30mm scale miniature, and is based on a 50mm base.  I added some extra scenery with Procreate, sculpting rubble and stone city-center sidewalkage to give him a strong sense of place. 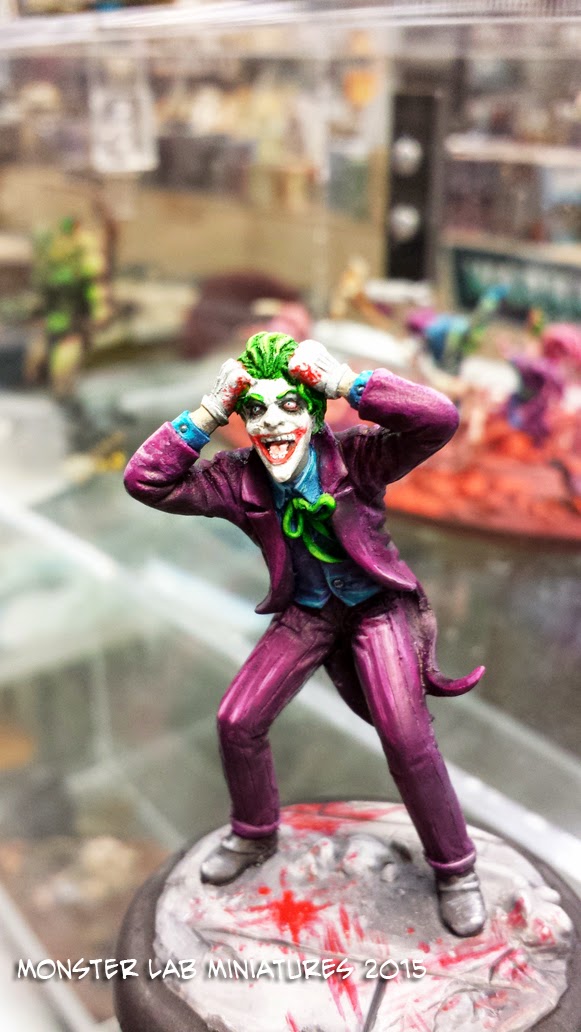 Taking inspiration from Heath Ledger's Joker, I wanted the vest/shirt and sloppy lipstick to mirror the movie version.  If you look closely, you'll notice that his blue eyes are bloodshot! 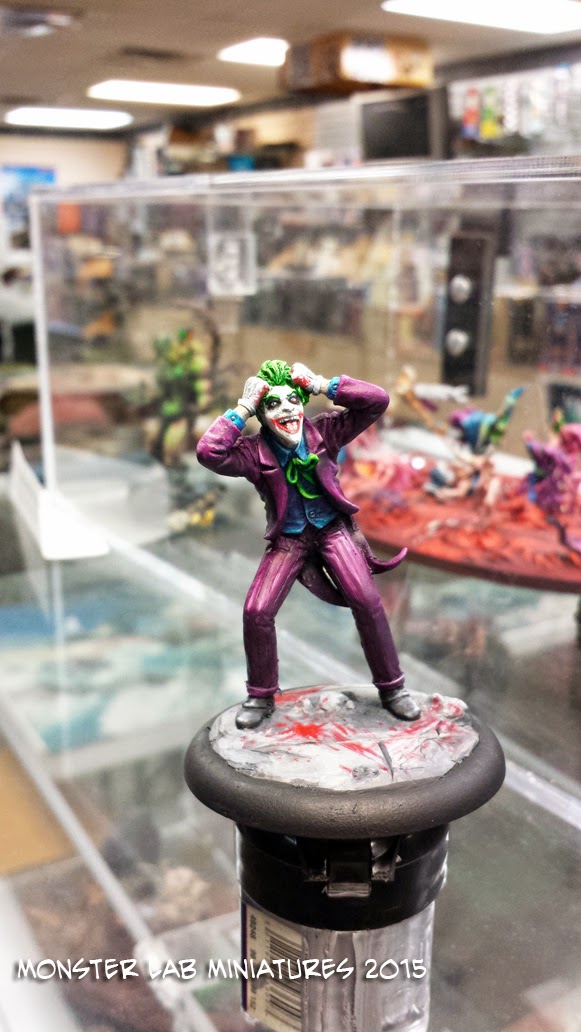 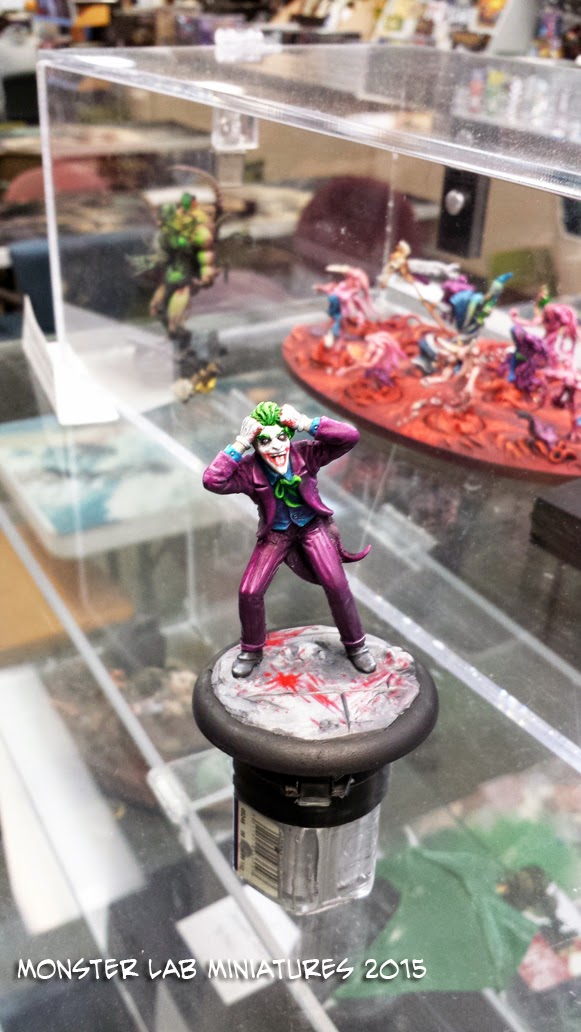 Killing is dirty business and a unhealthy amount of blood has been lost by unfortunate victims (probably from Robin himself). 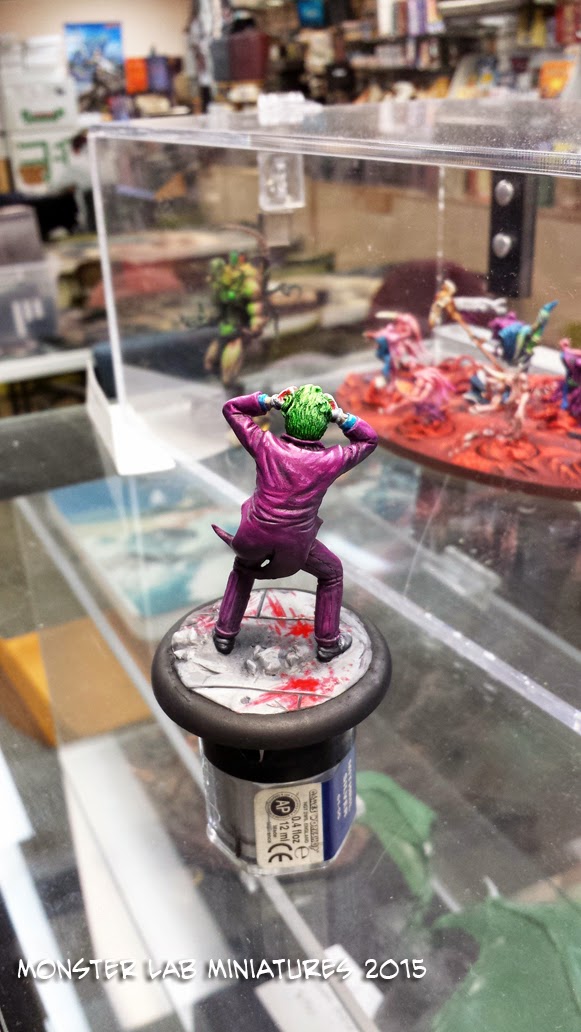 Thanks to Jason S. for the miniature, hope you and bro enjoy it! 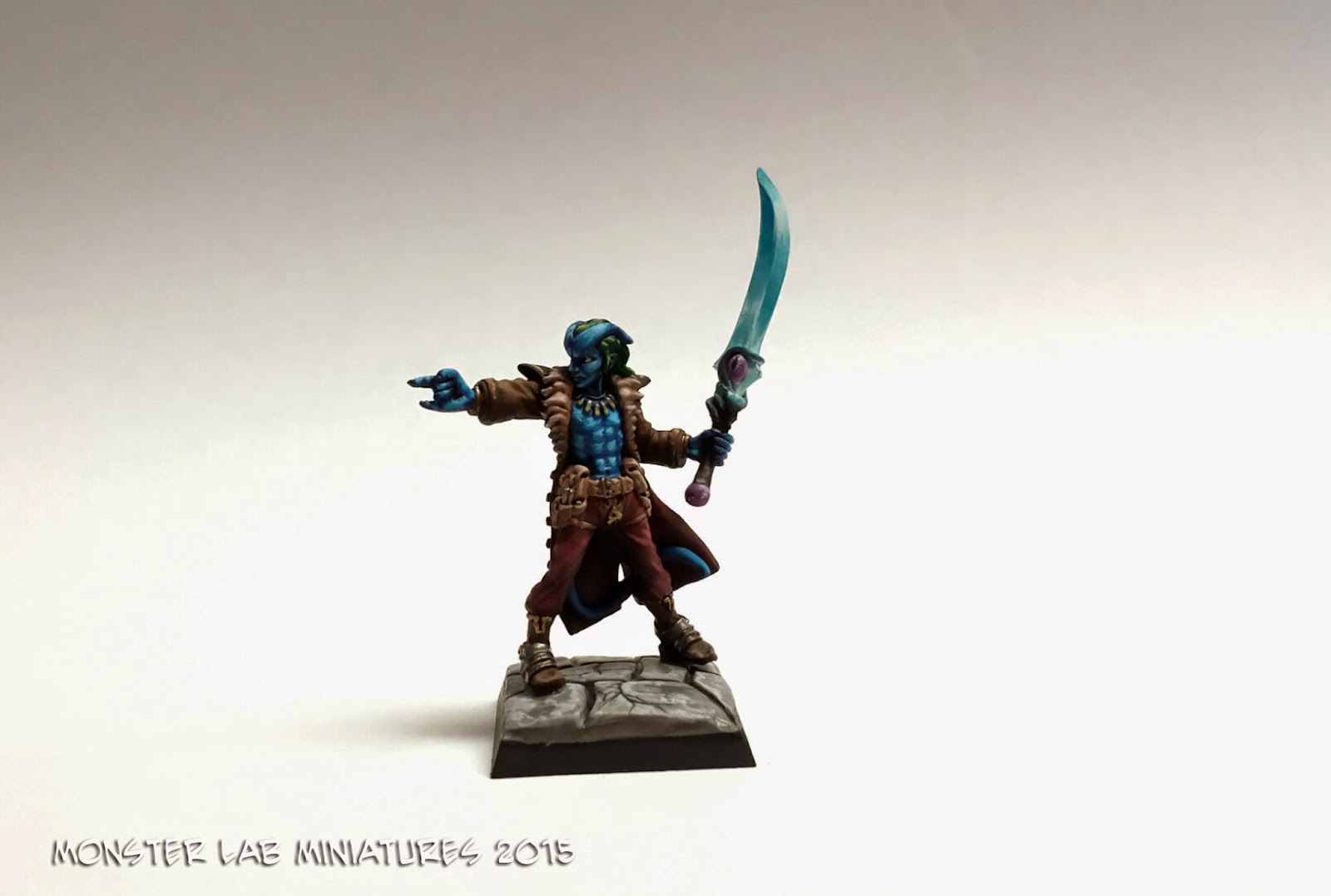 Next is a mini that I never get tired of painting.  It's a fantastic tiefling model, and just like the one I did before, this one came with a request for a custom blade.  As you can probably tell, this is no ordinary tiefling, but an original concept brewed up by John S. named Stix.  He's a warlock who has entered into a binding pact with Flixnar, a sentient scimitar.  Taking his inspiration from Marvel Comic's Nightcrawler, right away John was stepping out of the box with unusual choice of blue skin-tone, things got really interesting when Flixnar was thrown into the mix... 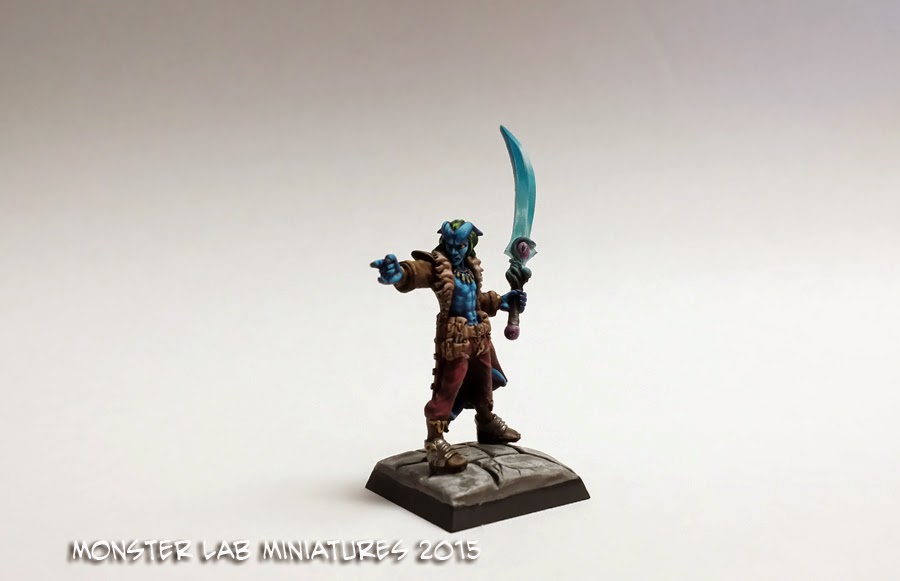 John's request was for a blade with a mind of its own, and other than a little light art direction given about the blade style it was up to me to portray its waking consciousness.  I knew right away that an eyeball and some menacing looking tentacles were going to be the route I wanted to take.  The idea that the creepy eye would be keeping tabs on its wielder, and the wandering tentacles (equally likely to wrap themselves about Stix's wrist as they were to do anything else) were the perfect combination I was looking for! 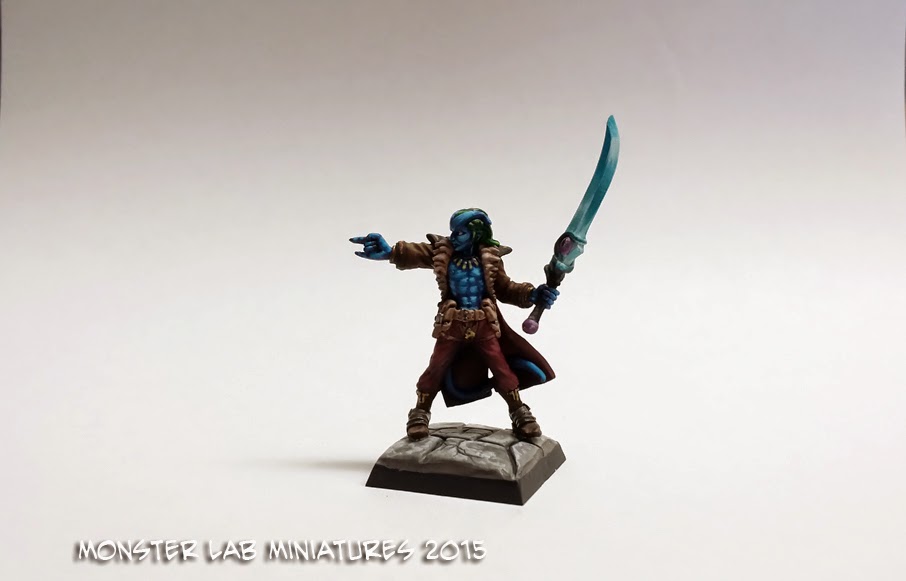 Stix even has some glowing embroidery on his coat! 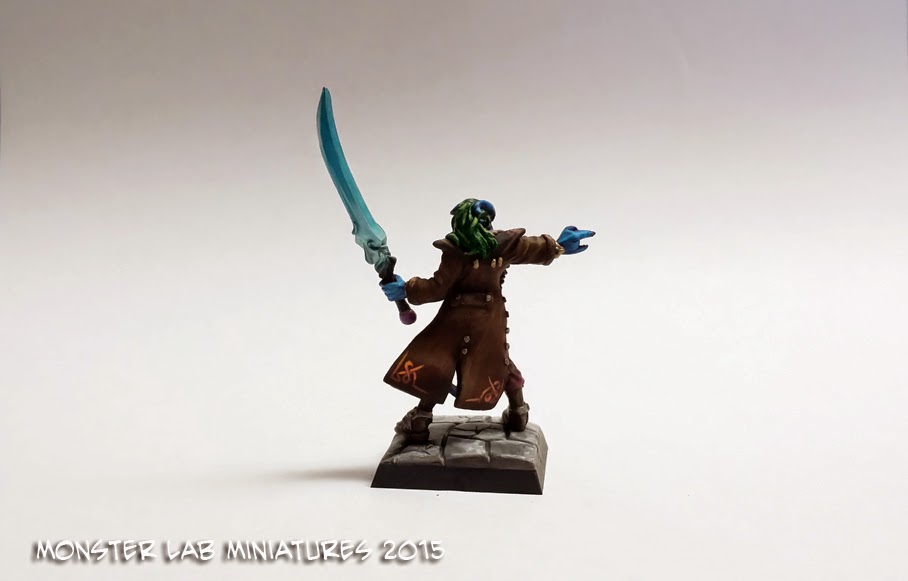 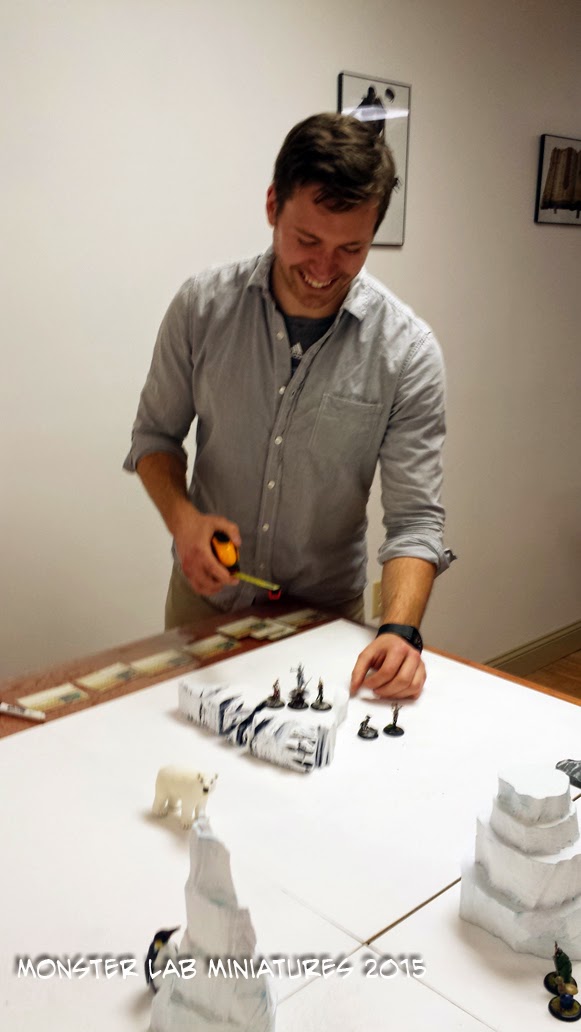 I've even managed to sneak in a few games of Malifaux here and there with good friends Donovan B. and Tyler W.  In our latest match I ran the deadly Viktoria sisters... 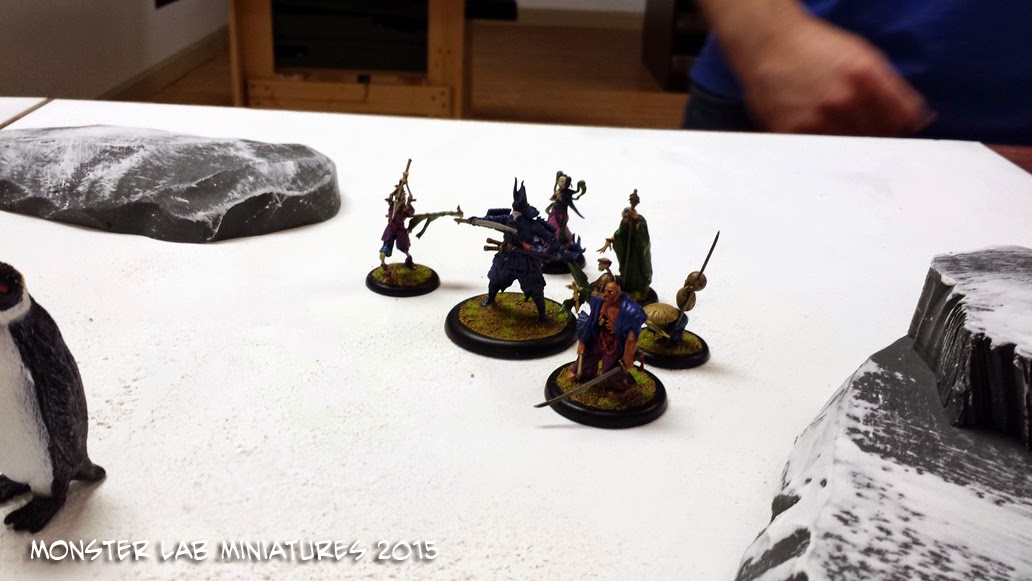 Tyler piloted Yan Lo and some of his shambling undead... 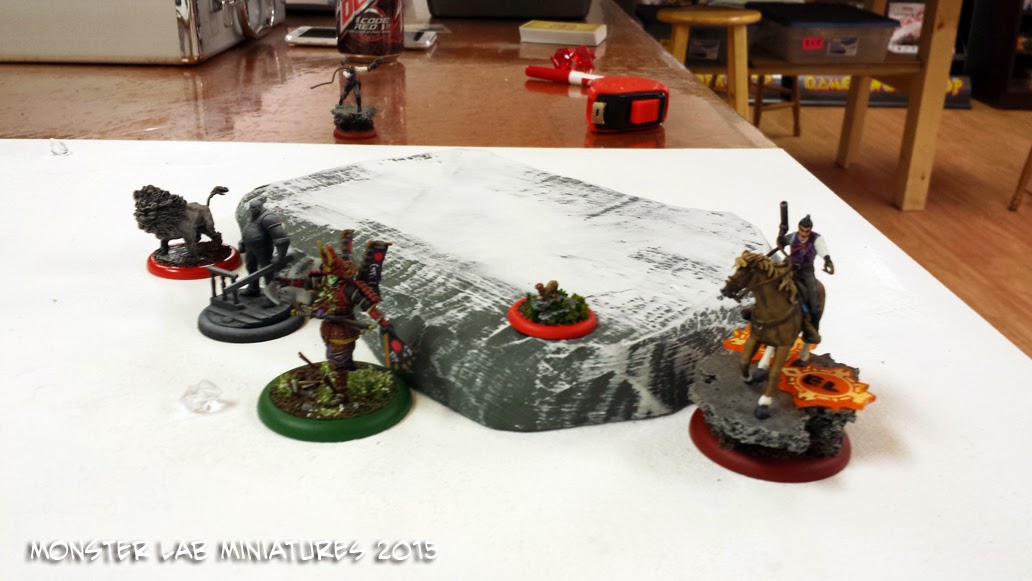 Donovan had a motley crew led by Lucas McCabe... 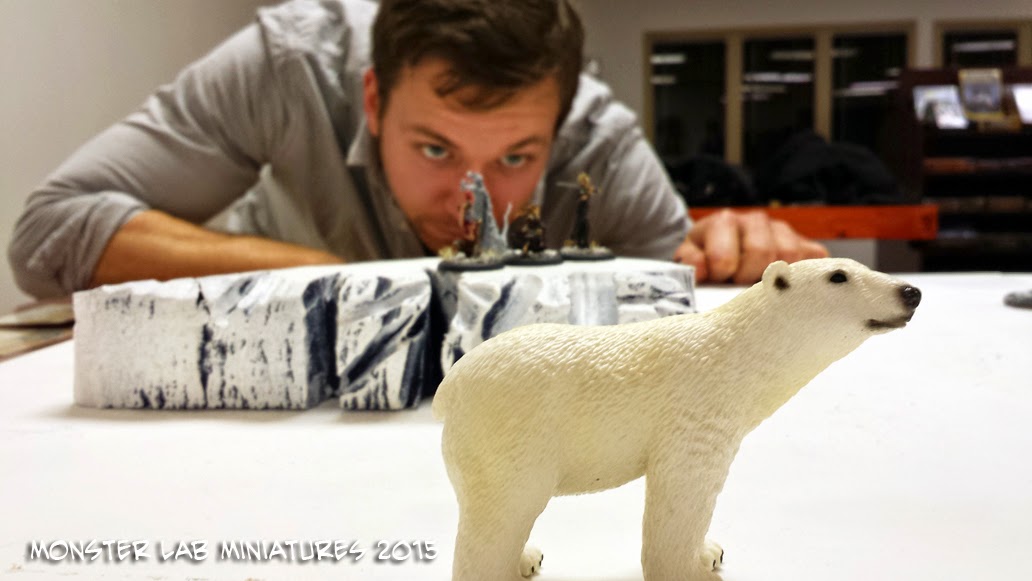 And in the middle of it all was a... polar bear?  Playing at the Geekery in Shawnee, we made use of some of their interesting extra terrain, which are the same plastic animals you probably played with when you were a kid, right along with your Tonka trucks... oddly enough it worked!

Donovan is kind of a dangerous terrain freak (he will find any excuse or means to introduce it into a game) and suggested that the two polar bears, and two penguins on the board be treated as such.  It was actually pretty hilarious, and I managed to pull out a last second win when I smacked his last remaining model into a polar bear with a swing from Taelor's relic hammer... not to mention the penguin that did work earlier in the match by beating down one of my sisters... 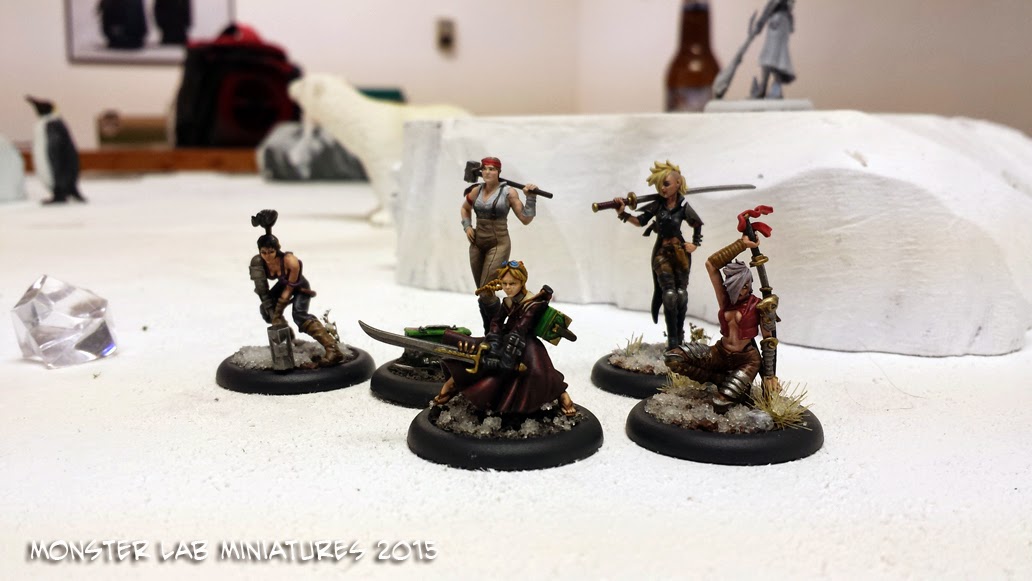 For future games with dangerous animal terrain, I suggested the ability to attack and kill the animals in order to ensure they don't maul you.  The catch is, that if your attack doesn't kill them, they'll attack you back and charge you if necessary! 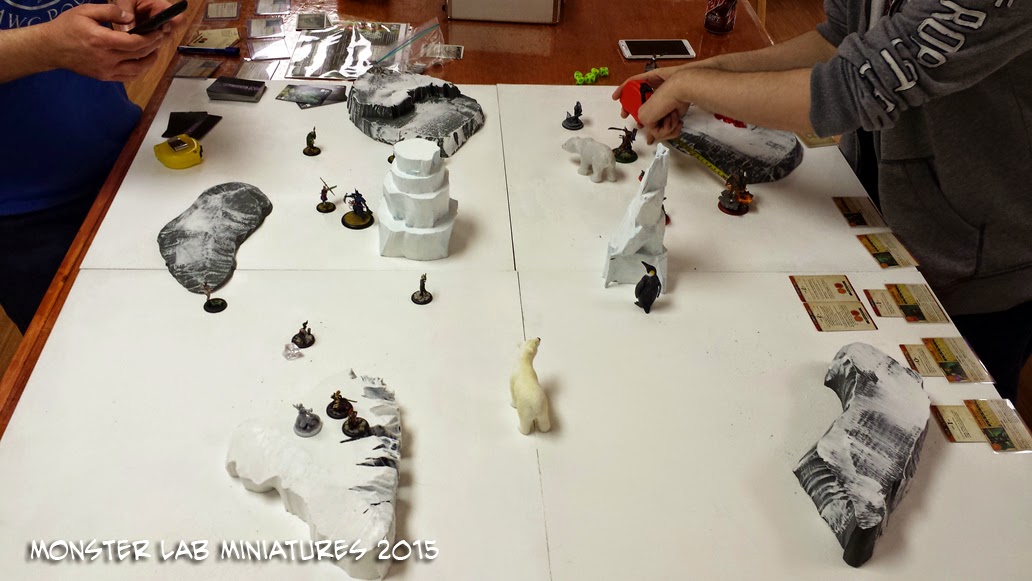 It's getting close to KantCon time here in Kansas City, and the fine folks at the convention have reached out to me yet again to make this year's miniature.  They mentioned one word and I jumped at the chance to be the one to sculpt it- Dragon! 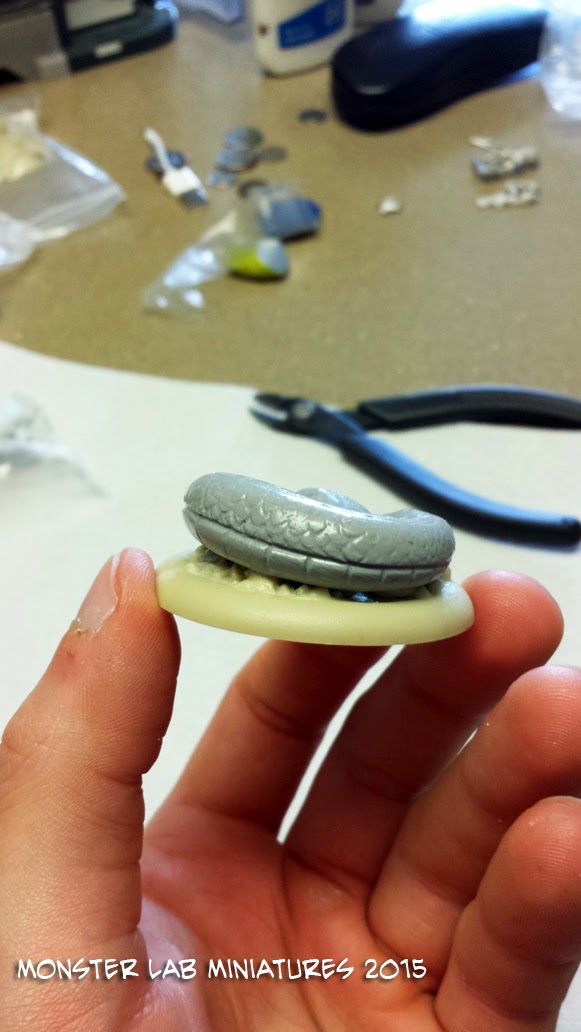 This year's mini is a serpentine dragon coiled around a pile of loot which cradles one of the convention's dice.  I'm really excited to not only be sculpting my favorite mythical beast, but to be doing my first true multi-part sculpted piece (horns, tail, and weapons bits will be separated on a secondary piece of flash). 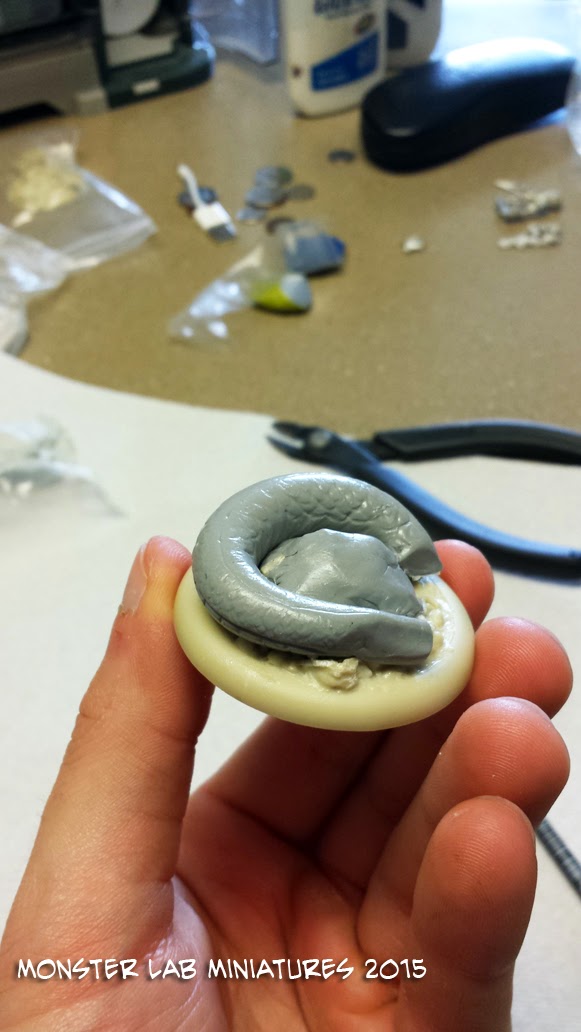 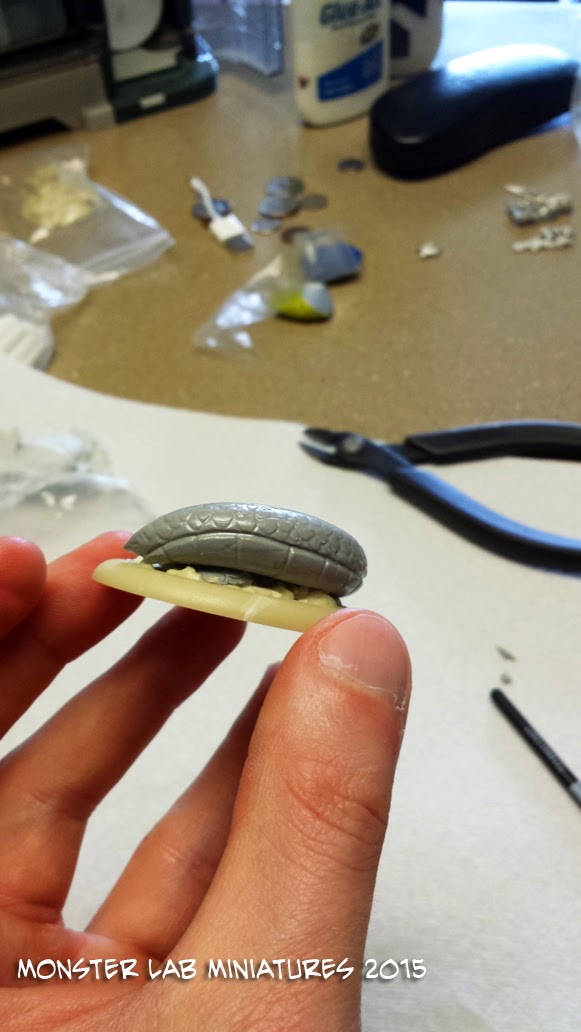 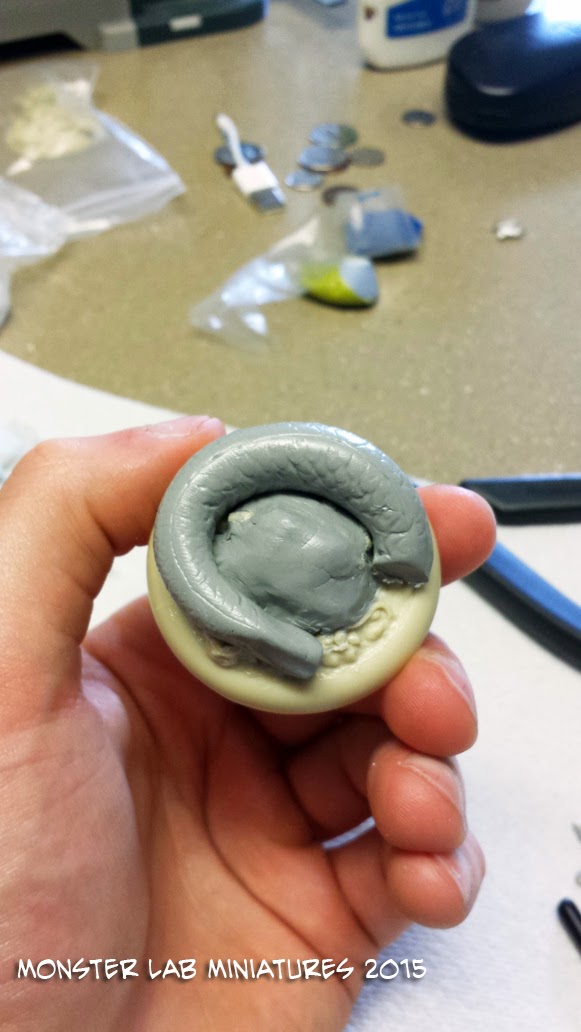 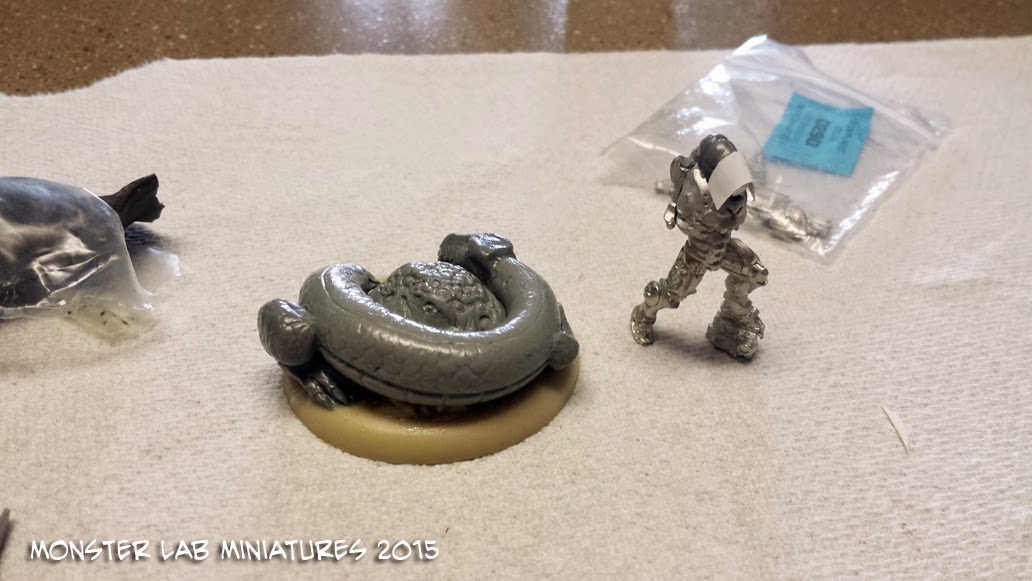 Finally a couple of arms, legs, and a head and he starts coming together! 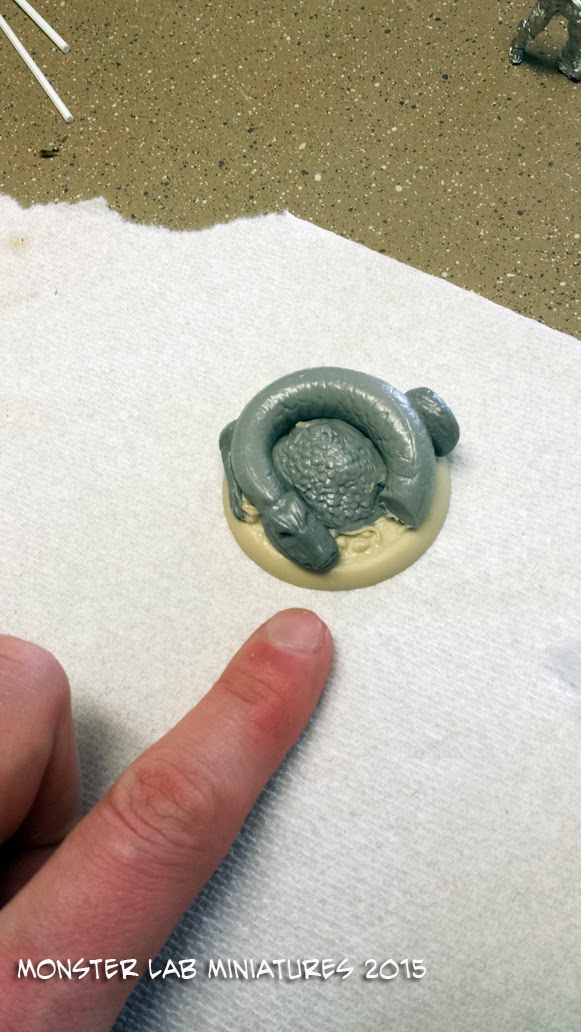 For those who are not 30mm minded.. a finger for scale. 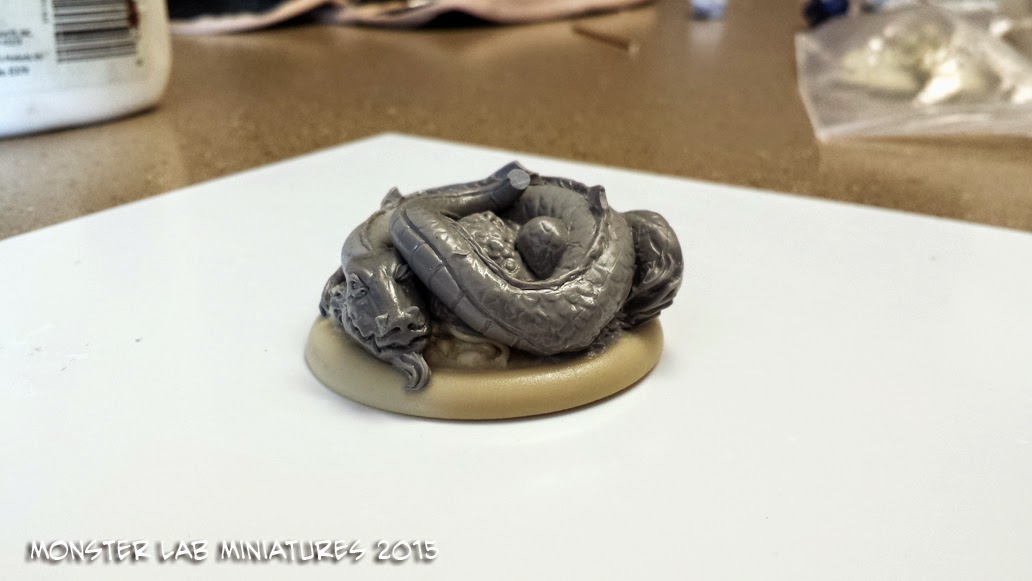 The last section of his tail will be a separate piece. 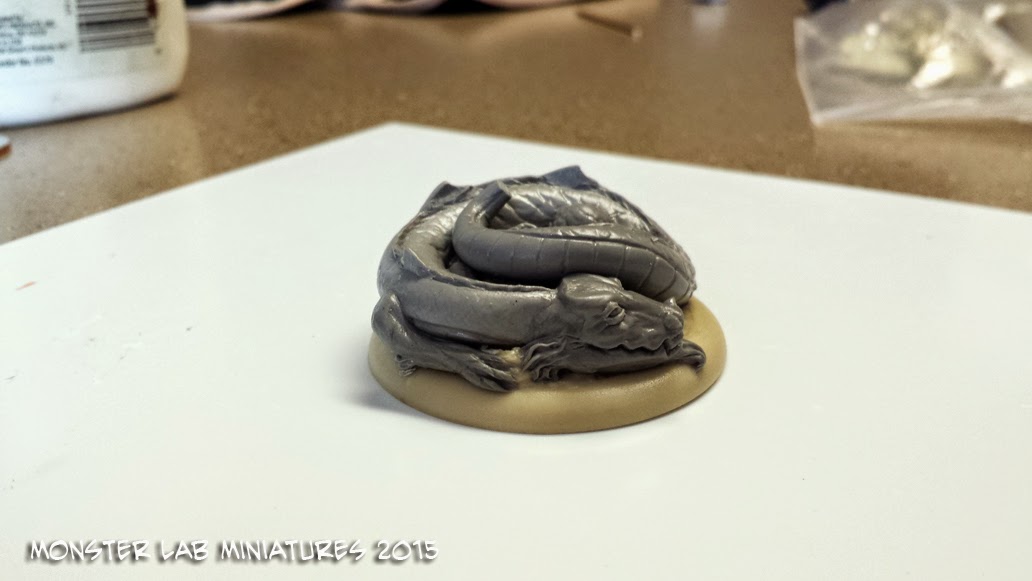 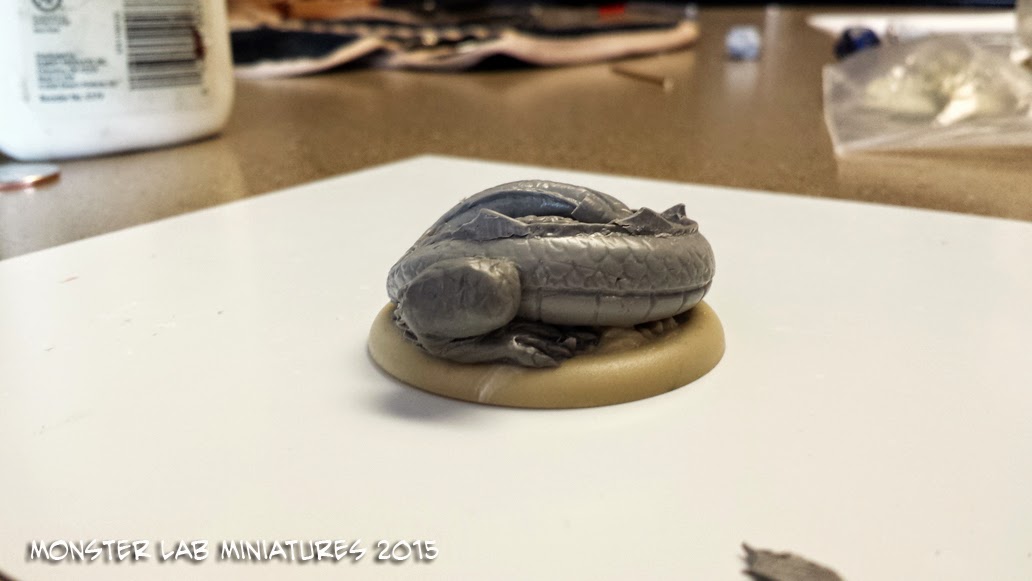 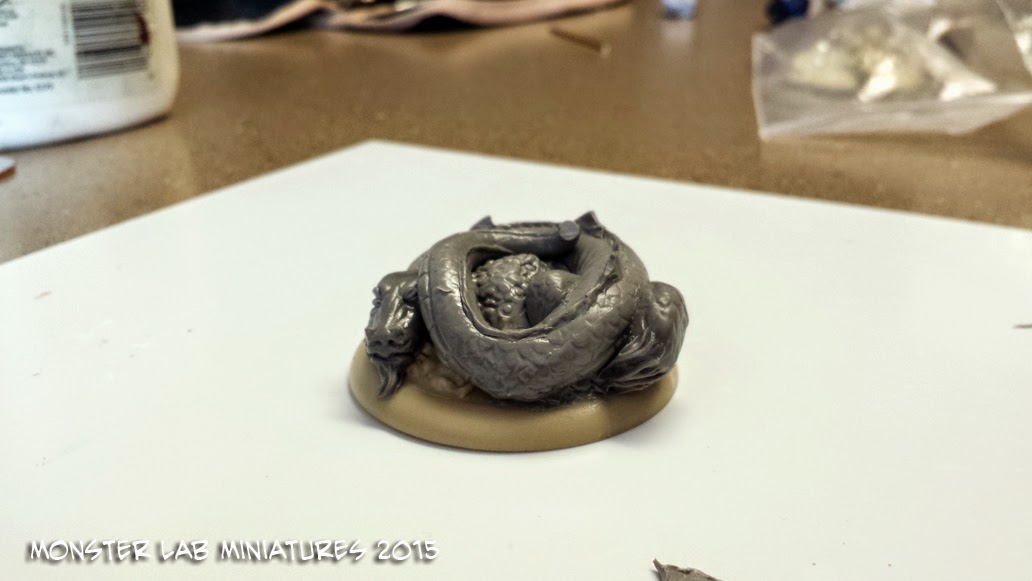 One eye is just starting to open... if it's a good idea to let sleeping does lie, then I think that goes tenfold for a slumbering dragon! 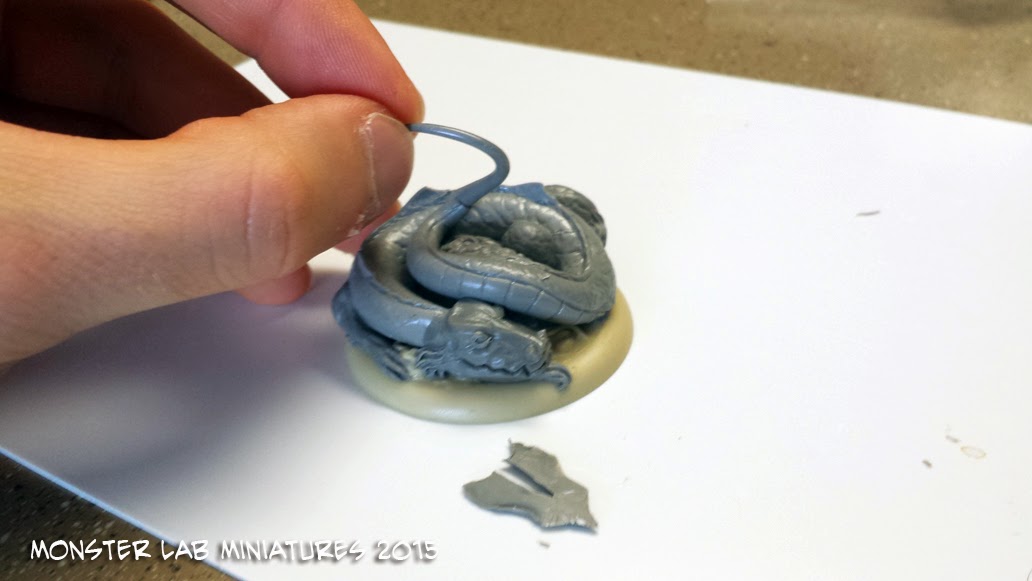 That's it for now.  Thanks for stopping by and checking out my latest projects.  Check back next time for the completed KantCon dragon miniature and more projects from the Lab!