This week I'm finally ponying up a promise to Jason C. and finishing his free Falkaaran Fire Wizard.  Jason won a small trivia contest I offered on the DGS forums, where he had to guess the video game character that I took inspiration from for a paint job on a Haradelan Archer.  Click the link, you guess who it was? 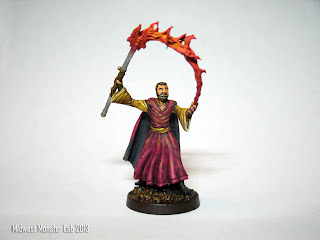 If you said Link, from the Legend of Zelda, then you'd have been right!  That's what Jason guessed and for his prize I offered to paint a model for him for free.  He chose a Falkaaran fire wizard for his mini, and after a few months of playing email tag, we met up and I finally got the model on my desk.

Let's take a quick look at the modifications behind the conversion and then a few more pics of the finished project!

The fire wizard is a cool model with a lot of potential, but to me, it's up to the hobbyist to really make the model shout, "I'm going to hurl some hot fiery death at your face!"  With that goal in mind I decided to do a conversion, adding trail of flame arcing from the wizard's casting hand up to his staff.  To get the job done I'd need my pin-vice, a pair of jeweler's pliers, a piece of super thin brass rod, a paper-clip, and some good old green stuff.

To start, I pinned a paper clip into his staff-arm allowing him a larger range of motion and the ability to hold his staff high above to better demonstrate his dramatics (fire mages are a showy bunch.  A bit of green stuff filled the gap nicely and fleshed out his sleeve to gel with his torso. 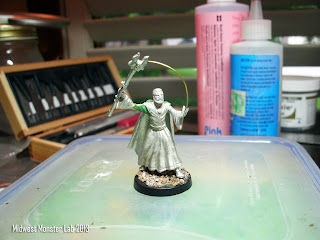 Next came the work on the most important part of the conversion, the flame trail.  I wanted to use the thinnest brass rod I had to be the support for the green stuff flame I had yet to sculpt.  This was for two reasons: the flame would be very thin at his hand and I didn't want any rod to show, and using a very light rod allowed me to easily get a smooth bend I wanted for the arc.

To attach the rod, I pinned it into the wizard's left hand and then worked along its length with a pair of jeweler's pliers bending it to get a nice subtle curve.  I marked where it met his staff and then drilled a pilot there, fastened the rod and completed the arc.  Now all there was would be to sculpt the flame! 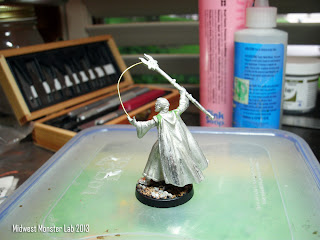 Unfortunately, I got a bit distracted with my time constraint and didn't take any more WIP pics from here, so hopefully those who are wondering about the exact details can make do with a brief explanation and the completed paint pics.

To do the the green stuff flame (which I am a novice at and am eager to try different approaches) I wrapped 'stuff around the rod first, smoothing it and pushing it into what would look like waves.  Finally, I added tear drop pieces to the arc, fastening their fattest part to the arc and pulling the narrow end into wispy tongues of flame.

After that it was up to a killer paint job to drive home the effect.  I know a darker set of base tones would have really made the source lighting stand out, but I decided on day-time lighting so that the whole model was clearly visible. 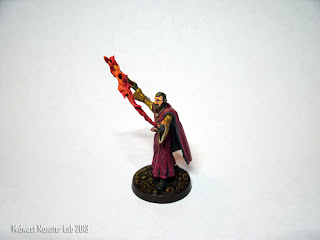 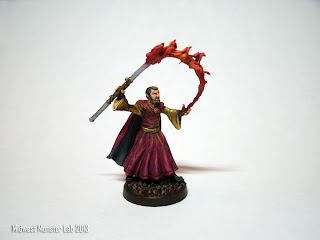 On his robe, I incorporated a pattern of cool diamond and flame designs to give a little umph to such a broad surface. 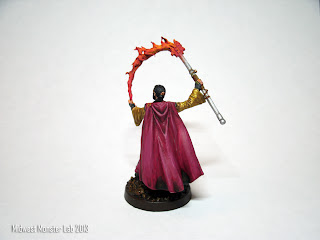 For his wardrobe I went with a rich red to emphasize fire, ash gray for contrast, and cloth-of-gold for his under tunic.  I seesawed a bit on the choice between using gold or silver, but in the end the MacDaddy of metallics won out and it was definitely gold.  Who'd want to wear silver anyway?... proabably these guys. 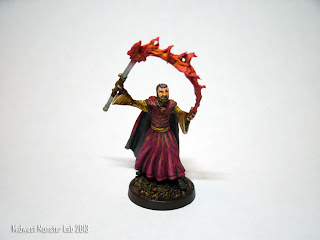 And that's it for this Falkaaran Fire Wizard conversion and what's on my desk this week!  Congrats again to Jason for knowing is iconic video game characters and giving me the opportunity to do this project!

Come back next week to see the freshly painted Freeblades minis I'll be showing off.

Thanks for stopping by, and as always, happy hobbying and good gaming!

I've got some pictures to show of my latest commission this week, the demon prince Bel'akor.  This commission was done for a long-time friend and first-time customer Tyler P.  He's building up a respectable force of demons for 40k and wanted a demon prince to hold down his battle lines. 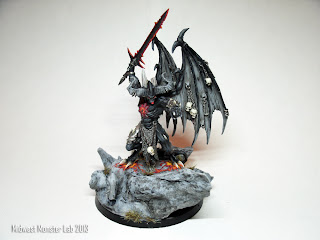 There are some who don't like Bel'akor as a GW model, saying that he's not in heroic enough scale.  I happen to like that most about Bel'akor's model.  He doesn't have the out-of-proportion appendages or weapons that can make heroics look goofy, just a clean and menacing appearance.  In my opinion, he's what a demon prince should be. 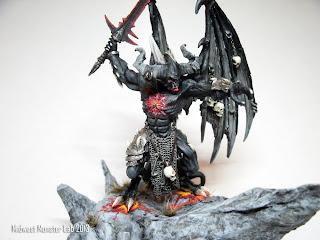 Tyler requested that his Bel'akor have the classic black skin hue and that he have a glowing sword, rune, and eyes.  The red tones on black look great and are a humble nod to the granddaddy of all demons, Tolkein's Balrog. 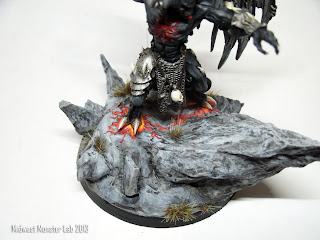 I took the idea one step further and made the ground beneath his feet molten, splitting under the weight of his dark power. 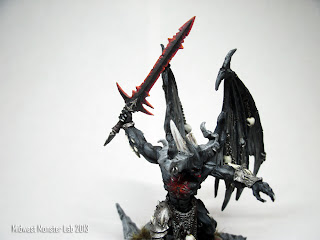 With an eight hour time limit for this project I found myself in a rush to get all the great little details in that I wanted to do.  The sword, unfortunately, didn't get as much attention as I hoped for.  A few glowing runes or trapped spirits would have been great to add. 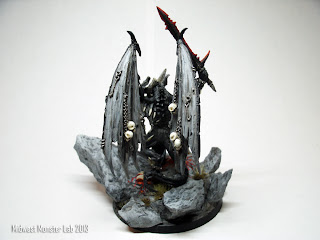 Bel'akor's base is a quartz-based stone, fractured into shards, and placed into Apoxie Sculpt.  I've found that stone laced with tiny pieces of quartz is the best for making "evil rocks," those that are sharp and jut out of the ground.  I harvested mine locally where a cliff side was carved away for a rural highway.

I keep forgetting, but I do need to make a post about where and how best to harvest different types of stone in the future.. look for it soon! 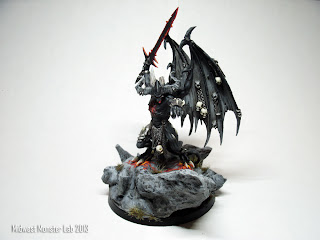 And there he is in all of his chaotic slendor!

Thanks for checking out my work this week, stop back next time to see what work I'm doing in the magical world of Freeblades!

What's on My Desk: Bandits!.. Plus Other Scum and Villany

There's more Freeblades models on my desk this week, and they're not the kindhearted good Samaritan types either.  These are the cold-hearted rougues that can be found stalking the dank alleys and backwoods of Faelon.  This motley crew is an assortment of villanous scum from far and wide across the continent and the group even includes a dwarf from the far-off Kazarl lands!

Though the faction is cool and a blast to play, I'm really excited to share the bases I've completed for them with you.  Let's take a look! 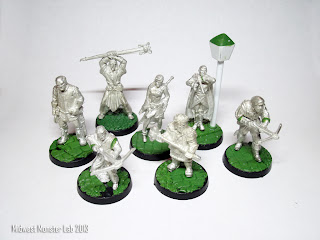 What started out as a fairly simple rubble basing scheme turned into something far greater and ended with each model receiving its own custom sculpted base.  A variety of cobblestone and brick bases are scattered throughout the group.. and what's that you ask? Yes, the duelist even has lamp post on his! 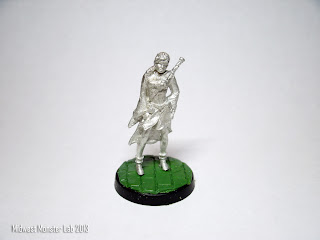 These are fairly simple bases.  To make bricks like this bodyguard is standing on, apply a layer of green stuff a couple of millimeters thick across the base.  Using a fine edged modeling tool, press parallel lines into the green stuff to create the length-way sides of the bricks.  Press in lines to create the ends of the bricks, staggering them so that one brick ends halfway up on its neighbors.  Round the corners and edges of the bricks with your tool to give them a natural look and you're done! 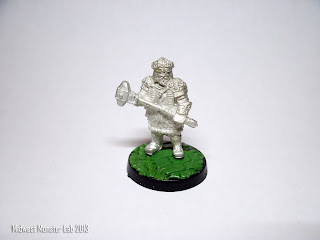 This Huscarl got a more involved base, half brick, half cobbles.  Cobbles are made in a similar fashion as bricks, but instead circles of varying size are pressed into the green stuff. 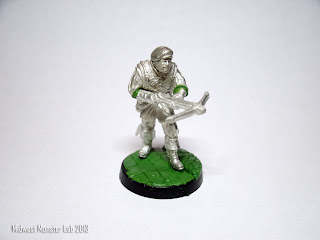 As I was working I began to think that these bases could be part of a more complete city scene, hence this bandit crossbowman's street base transitioning into a cobble sidewalk. 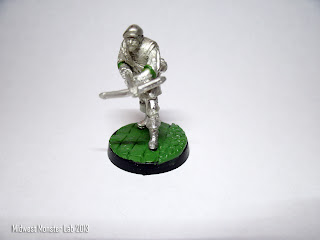 The cobbles are raised higher than the brick to create a gutter just like any modern street. 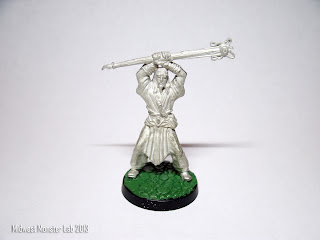 This Mershael Illusionist is casting his deceptive magic from a piece of cobbled sidewalk (probably safely sheltered behind a meat-shield of his more mundane compatriots). 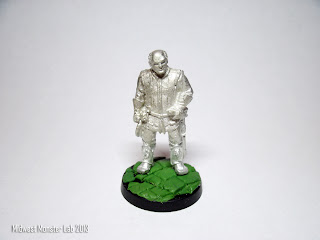 This rustler and bandit crossbowman below are standing on less pristine ground, where the bricks and cobbles have been broken and scattered. 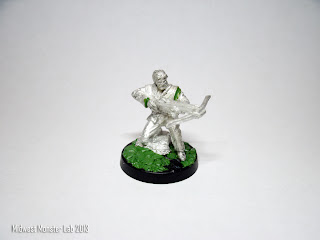 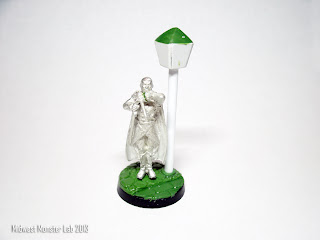 And here's the duelist we saw before in the group pic.  As you can see his base has received the same cobble sidewalk and brick street treatment as the mercenary crossbowman's with one large difference.. a lamp post!  I felt that a rogue who used stealth and finesse wouldn't simple be standing out in the open, but probably hiding behind something.  As you'll see in the pics to come, he's waiting behind the post waiting for his victim to come haplessly wandering down the street before delivering a gut shot! 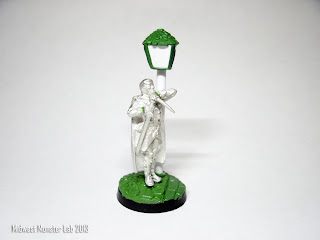 The simple plasticard and 'stuff foundation got more additions to bring the lamp to life.  I decided upon a rustic shingling for the top and flat bracketing to hold the lamp's window panes. 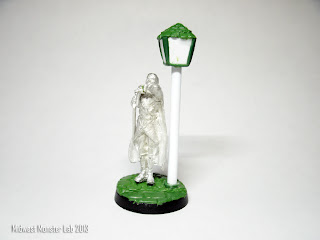 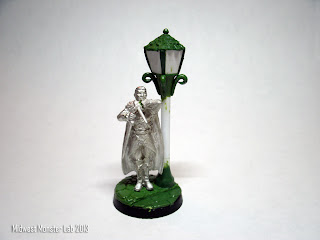 More green stuff at the base of the post and where it meets the lamp fleshed out the post, giving it a better dimension.  To finish it off I wanted a little more embellishment, so I added four curled post flukes.  I debated about the ball on top and eventually it won out, I'm glad because though it was very minor it ended up being the last little bit the lamp post needed to look look suitably ornate and old-worldly. 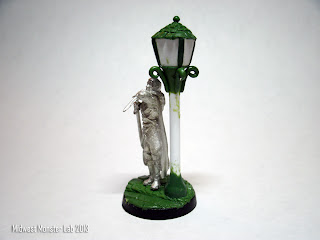 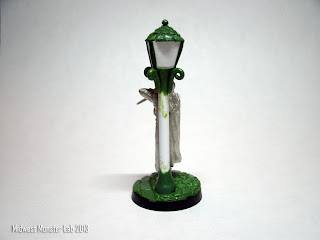 There it is, a post for the rogue to hide behind in order to deliver his death-blow! 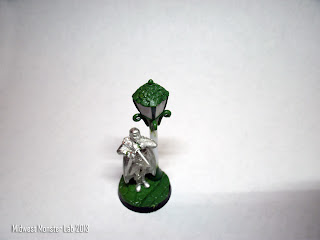 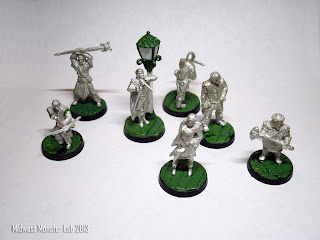 You may have been wondering if the whole group could be put together into a diorama, if you guessed yes, then you were right!  The unfortunate about to receive the duelist's attack happens to be his own rustler.. maybe I'll make an opposing freeband with the same basing scheme so he won't have to kill his own hired hand. ha ha

That's it for this week and what's on my desk, thanks for stopping by and checking out my work!