What's On My Desk: Dwarves, Merchants, Pirates, Oh My!

Welcome to the second installment of a new series I'm calling what's on my desk, a quick feature that gives you a glimpse of the works-in-progress that pass by my desk on a weekly basis as a professional commission painter.  This week I've been working on yet another commission for the lead rules designer of DGS Freeblades, Jon C.  Jon's commissions have been a real treat to paint as he sends me yet to be released minis from his company and others he wants painted for his role-playing group, in short, I get a great diversity of miniatures to paint and the opportunity to try new things.  Let's take a look at what I've been working on this week... 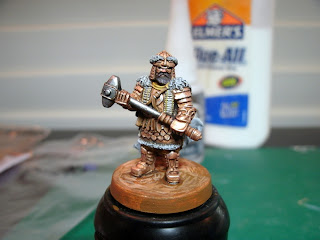 First up is a dwarf model yet to be released for the Freeblades line.  This is one of the coolest dwarf models I've ever seen.  He has a ton of great detail and doesn't fall within the classic realm of huge headed, comically proportioned dwarves that we've come to know and love in table top gaming.  For this guy I wanted to go with a humble paint scheme of browns, greys, and brass metallics to evoke a traditional fantasy dwarf theme, simple and regal. 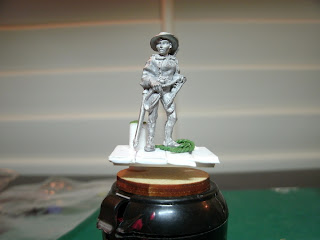 A mini yet to receive paint is one I'm especially excited for.  I wanted to really go to town on this pirate's base and give her a strong sense of place (rocks and rubble just don't cut it sometimes).  To make the base I cut a cylinder of plasticard for the pier's piling and plasticard sheet to make the planks.  A bit of green stuffing for the rope and, viola, a pirate on a pier. 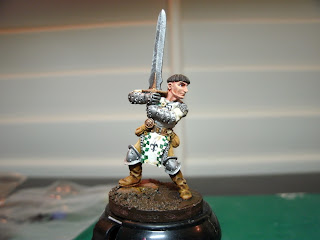 For the next mini I painted I received pretty broad instruction from Jon to paint him with "green and white heraldry," that's it.  With the door wide open I found myself spiraling down into the vicious-cycle-of-adding-more-and-more-detail-DOOM.  It started with me saying to myself, "hey, green and white checks would be a cool way to build his heraldry," then, "oh oh, a fleur de li would look killer and fill that empty area on his tabard," and then, "he needs something to fill that huge blank area on his back, a quartered fleur de li would be beyond sick," and then finally, "now I'm going to have to paint a hidden quartered fleur de li on the front of his tabard because there's no way it wouldn't just be on the back."  Hours later this was the finished model, still in need of basing. 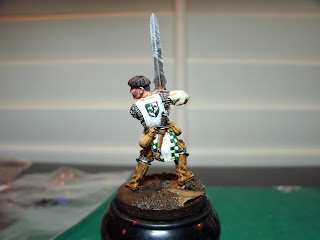 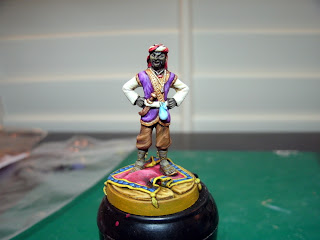 The last model to be painted was the unpainted WIP I showed off last week.  This is the nearly finished paint, needing only a few more embellishments.  Like the pirate we saw before, this guy was another model that just wouldn't do standing on desert sand or amongst bushes.  To make his base I used a bit of rolled green stuff to create the cracked sandstone market street and the rug he's standing on.  For the rug I had big plans, tons of embroidery and neat intricate designs.  To finish the model I plan to do a swirl of gold knit on its large red background. 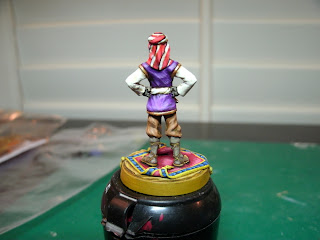 That's it for what's on my desk, come back next week to see more fantasy and sci-fi models being brought to life at the Monster Lab!