The Sartoris Campaign and A Table for Home

The dark shadow of war is slowly casting its midnight pall over the Sartoris System, a system of three planets, ruled over by a yellow sun, and an entourage of eight moons. It is a region of building darkness, where menace hides its traitorous visage amongst the teeming masses of Aequus Hive and manufactures its plots on the forgeworld Lux. Something sinister is even rumored to stir beneath the surface of Reach's enigmatic surface, whispering dark promises. In preparation for the coming conflict, armies both local and from afar are amassing on the system's borders and hastily shoring up planetary defenses. It is in this time of rising upheaval that only one thing remains certain, the grim darkness of the far future promises only war!

For the past few months I have been working on the details for a 40k campaign, and at long last the battle for the Sartoris System has begun! The campaign will rage across the three main planets: the mining colony on the gas giant Vitral, Aequus Centrus the main hive city of Aequus, and through the manufacturing district of the forgeworld Lux. In addition, some of the planets' moons will be up for conquest: Vitral's forest moon Sinceros and craggy moon Canis, Aequus' outpost moon Reach, and Lux's sun scorched rock Crassus.

This is a really fun opportunity to play some unorthodox games, and use a unique set of rules made to simulate total system combat, there's even a mechanic for fighting ship battles and scuttling blockading fleets! As the campaign progresses the map below will be updated on a weekly basis with which territory is held by which faction, where each player's fleet is currently at anchor or in orbit, and what planetary resources have been claimed. Check out our campaign page on facebook!

A really cool aspect of the campaign is that some battles must be fought on specific tables. An example of this is the moon, Reach, which contains only one territory tile. All battles fought on Reach must be played on the table in my basement. 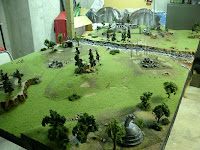 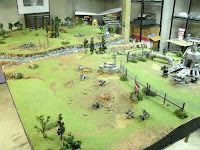 I built this table in high school a few years ago and it has been a great investment. When friends want to come over and play late night or in privacy my table is our venue of choice. 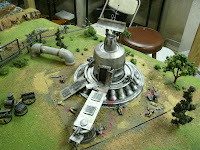 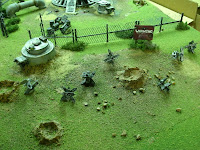 Reach features a fully functional Imperial Guard outpost, complete with perimeter fence, mine field, tank traps, perimeter defense guns, and interior defense emplacements. Unfortunately for the guardsmen stationed here, they were the target of a particularly brutal assault. One of my favorite casualties is a guardsmen reduced to his boots (there's a pair of boots around back of the outpost where he was snatched out of them, see if you can find them!) 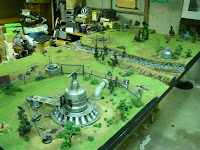 In addition to the guard outpost, a collection of four ancient shrines lie off to the west. The purpose of the shrines is mysterious and their geometric ornamentation is thought to be of some significance. The ruins predate that of most known civilizations, and most assuredly were not built by human hands.. were they built by some sort of pre-race of old ones? 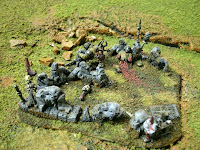 Something sinister has been taking place on Reach, and as evidenced by these corpses it has something to do with Chaos.. 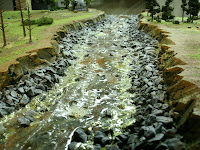 A raging river splits the table almost in half... obviously the guardsmen planned on putting their amphibious Chimeras to good use! 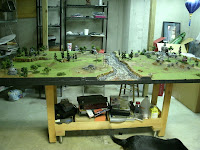