Lost in the Warp: Found Pictures 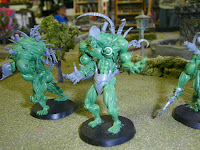 Drifting amongst the pernicious winds of the immaterium (that's the way I like to think of the internet) a number of lost pictures have been recently reclaimed from its murky depths. Ok, so maybe finding a few lost pics isn't that dramatic, but hey, I like to think of my email inbox as a particularly cluttered corner of the warp. In the "drafts" folder of my gmail account I stumbled upon an email that was never sent, and lo and behold, it held the pics of my grotesques as greenies! 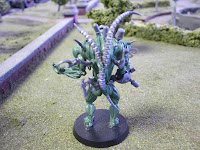 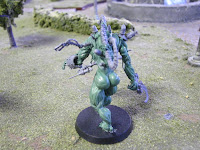 I built all three from the ground up, using paperclip frames and layering on a rough foundation of green stuff before adding layers of green stuff musculature. GW Talos/Cronos bitz were used to accent the pieces and give them a uniquely Dark Eldar look. 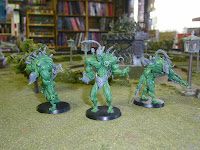 These pictures were taken immediately after I finished sculpting the three grotesques back in July. It was my original plan to enter the three as a squad submission for the 2011 Chicago Golden Demon competition. However, I only had two weeks from the time these pictures were taken to get them finished, and somewhat bittersweet, I abandoned that project to complete what became a runner up in the diorama category for the year's GD. 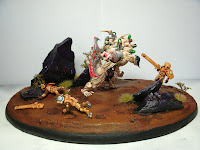 The finished diorama in all its violent glory. 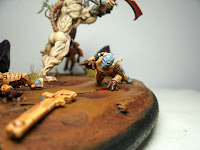 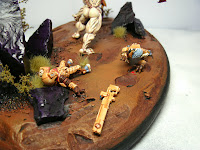 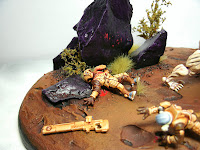 The idea to do a battle-scene with Tau Fire Warriors and a Grotesque came from the initial plan to use fire warriors as scenic casualties in the squad entry. With the squad nixed I knew that Tau would be the perfect adversary for the diorama! 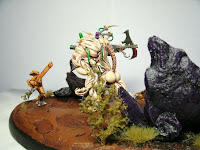 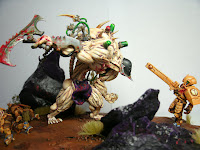 A critique I got from James Craig, Phil Kelly (I think it was him judging), and others was that the basing needed higher levels of detail and highlights. I couldn't agree more. The entirety of the basing, from blank wood to finish, took the last 24 hours I had before my plane flight to Chicago on Friday. James stated that, "the models look more painted than the basing, and the basing looks more realistic than the models." I felt humbled simply to be receiving advice from a multiple GD winner. It was an awesome experience. 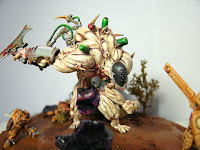 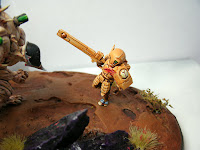 I wanted to give a strong feel of action to the scene, hence the crawling Tau and the one getting slashed. The slashed Tau is caught off balance, about to be launched bodily through the air, after receiving a particularly grievous wound to the chest. The blood flecking his armor and the surrounding rocks gives the impression that his death is a messy one. I have to admit, I was a bit conservative with the blood splatter and gore... I didn't want to mess up my GD entry at the eleventh hour because I got too gore happy! 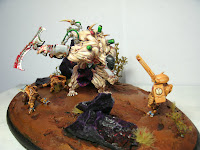 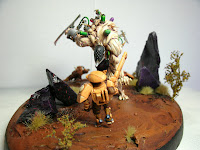 The whole thing was an awesome experience that was months in the making. I had a blast in Chicago hanging out at Games Day and getting to meet some of the best painters in the business. It truly is a satisfying experience to take a concept out of the depths of your imagination to the reality of the table top. 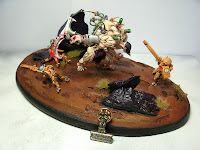