A few years ago I struck upon the idea to do a Tilean themed Vampire Counts army. For those who are familiar with Tilea in the Warhammer world, it is a province in the south of Old World, just north of Nehekhara. As the geography suggests and the fiction (Tilea is described as a collection of warring city states like renaissance Italy) Tilea is an homage to Italy/Greece. The chance to model an army that would resemble the legions of the Greek underworld was an opportunity I couldn't pass up!
The premise of the army is that Hades (vampire lord) is leading the undead legions from Tilea and he is bolstered by army book units that have been modeled to resemble characters from Greek mythology (i.e. a black coach is modeled as the Boatman of the River Styx). Here's a few of the models I have done so far. 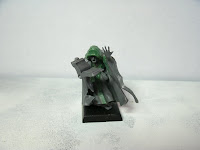 Hades is going to be a baddie vampire thoroughly decked out and riding around on some bad-a mount. However, he needs back up from some more subtle spell casters. 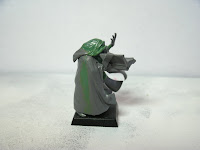 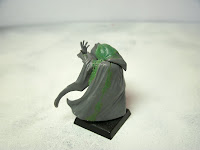 Here is one such necromancer, in this case Hypnos, the Greek mythological embodiment of sleep. I used the empire wizard plastic boxed kit as the basis for this model while adding some green stuff details. The enormous hood he is wearing is great because it gives him a drowzy feel. In juxtaposition to that, there is an added degree of motion as he is intoning some incantation from his tome. His idea of "sleep" obviously a bit self-serving, in that he is raising the restless dead. 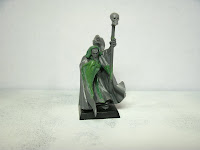 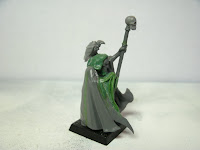 Hypnos' counterpart is Thanatos, the embodiment of death. For Thanatos I once again used the Empire Wizard kit as his base. I wanted to give Thanatos a equally shrouded feel, but this time kept the hood to a smaller size and focused embellishments on the cowl he is pulling up in front of his face.. very Nosferatu-esque. Another touch was a wiry "Greek" beard, modeled to resemble those found on Ancient Greek statuary. The last bit of conversion work was to add a vulture from the Giant boxed set on his shoulder. 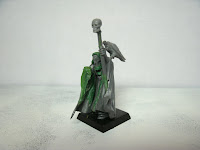 At the inception of my army I decided to include a unit of Dire Wolves. My idea was to have their squad leader be Cerberus, the guardian to the gates of the underworld. 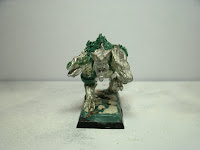 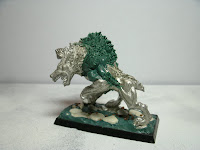 For this particular model I used three different Reaper Miniature wolves. Two heads were severed from their bodies and then glued onto the central wolf's body. 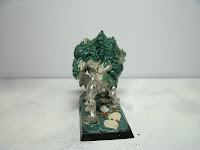 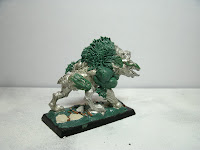 The "skull head" was made from a similar head as the other two, but I used an exacto-knife to file off its details until it resembled a skull. To have a standard on which to base my carvings I googled 'wolf skull' and used a picture for reference. 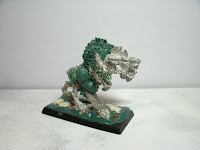 The initial idea was to have Cerberus as the leader of the Dire Wolf pack, but.. 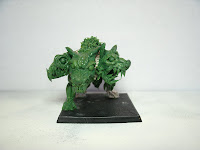 I decided later to up the ante and convert Cerberus off the Varghulf frame and use him as such. 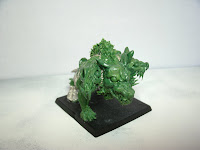 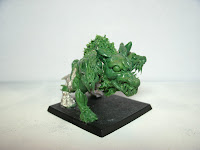 The details for the Cerberus were done in many layers. First, I hacked off the front half of the Varghulf with an exacto. Next, I bent two sections of paper clip to make a frame for each of the new front arms. I applied a rough layer of green stuff to the paper clip to bulk it out slightly and add stability. With that done I made nubs for the basis of the heads and applied the foundation for the back ridge. With the foundation pieces dry, I started on a multi-step process of adding layers of green stuff to make the head details and arm details. The arms were easiest as they were either balls of green stuff (bicep/tricep muscles) or chords (forearm muscles).
This is a pretty quick explanation, but I plan to have a step-by-step in depth how-to for complex musculature modeling later! 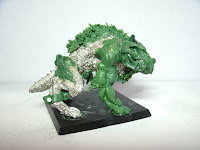 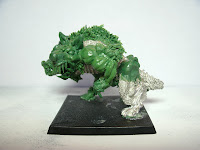 The last bit of detail for the model will be the remnants of a chain attached to the brace around its ankle. 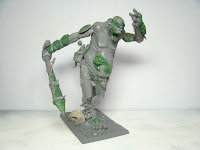 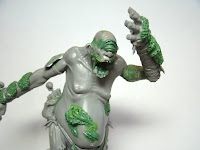 What Greek themed undead army would be complete without an undead cyclops? Just such a model was converted up to represent the cyclops Polyphemus, who Odysseus and his men so rudely abused when they ate his sheep and then proceeded to poked out his eye. I wanted to capture Polyphemus some time after he had his eye put out and died, wandering blindly around his island home. To do this I modeled a central closed eye and a decaying jawline that is agape and looks as if howling. His hand is raised near his head to give the effect of him sheltering his battered eye as he cringes in his throes of pain. 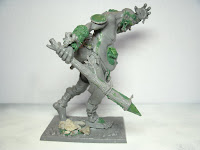 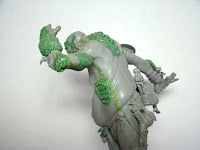 A number of his bracers were carved off and replaced with green stuff sheep skins. Note the ram head skull on his arm. Little affectations were given to make him the "real" Polyphemus, who lived off of his livestock and the land. Besides gaping wounds and rotting flesh, the other really characterful conversion was the modeling of his club, the very olive tree trunk which was used to poke out his eye! 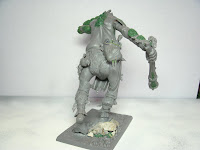 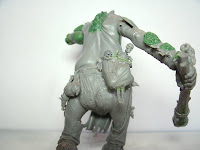 This is just the start to the modelling that I have in store for my Vampire Counts army. Future work in progresses include: The Boatman of the River Styx (Black Coach), Hoplite infantry (Grave Guard), Undead centaurs (Black Knights/Blood Knights), Siren (Banshee), and Harpies (Giant Bats).