The Oath-Broken have been unleashed!  This week I finished painting a conversion commission I received from David. D., a unit of chosen for his Black Legion army.  The Oath-Broken were a ton of fun to paint, each having his own unique personality, and all of them being rough-and-tumble misfits looking for redemption.

Let's dive in and take a look at the painted minis! 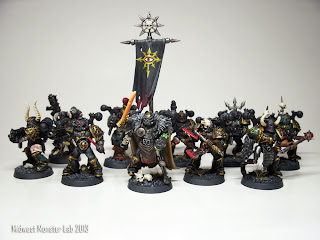 Marius Titus leads the band of Oath-Broken, a veteran of many campaigns, looking to regain his position of prominence within the Legion. 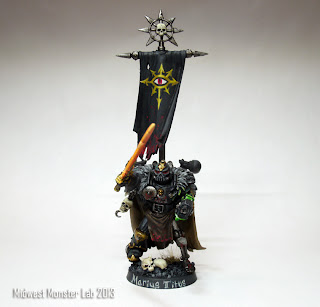 I wanted three contrast points to stand out on the finished model: his power swords, plasma pistol, and banner. 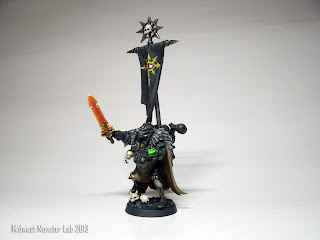 Once you get the hang of it, painting glow effects is a great way to add a visual "thrum" of power emanating from a weapon.  Of course, his power sword and plasma pistol emit such a glow.. his helmet's eyepieces do too! 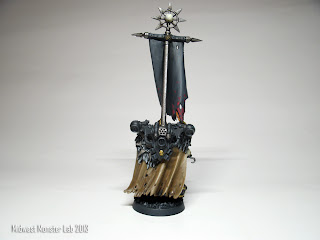 That banner has seen some serious carnage, blood crusted to its front and back.  I'm willing to bet Marius picked it up off a fallen standard bearer and strapped it to his back so that he would be more visible to those he wished to impress on the battlefield. 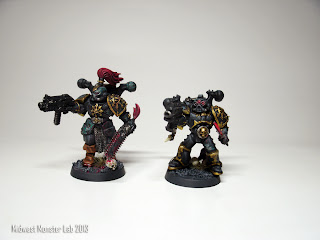 Here's the two in the squad shooting one-handed, fully painted!  Where each O.B. has taken combat damage on his armor the recently painted (in the last 10,000 years or so) black has chipped away to show the original sea-green of the Sons of Horus. 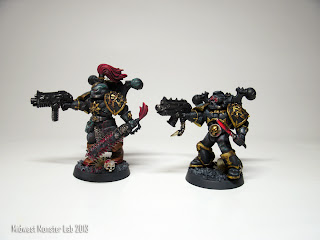 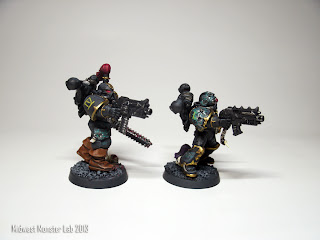 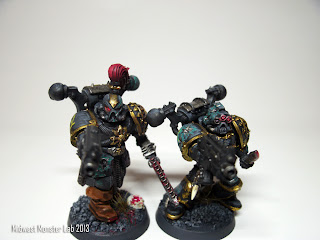 You might have noticed that each of the two above has a lens that is not emitting a glow.  Both have sustained damage to their helmets, disabling the higher uses of one eyepiece (I imagine they can still see through them, but they don't get battlefield specs, etc.). 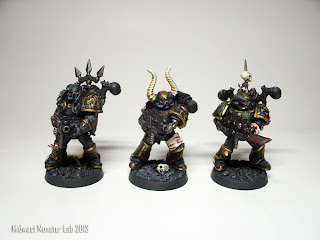 When going full-auto on your bolter, only two hands will do, and that's exactly what these three are doing. 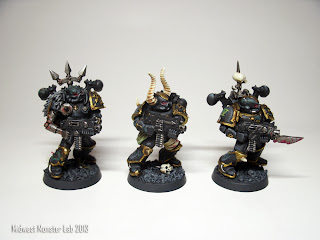 Now that they're painted, a lot of the cool conversions that went into each model are clearly visible; like the bionic right arm on the marine in the upper left. 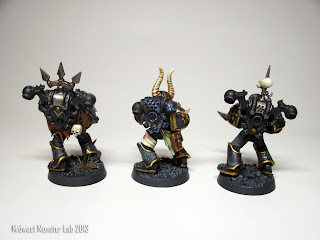 The middle O.B. scavenged a backpack off of a loyalist marine... probably an Ultramarine by the looks of things. 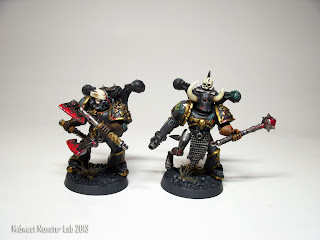 And now for the close combat fanatics!  These two are a couple of my favorites, especially the one with two axes. 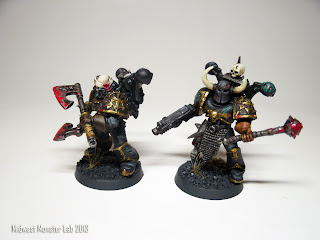 The dual axe-wielder has had his eye put out, and it's still oozing.  Check out the scars radiating out from his eye socket!

Judging by the weapons of these two, they've really been thrashing their opponents in melee combat. 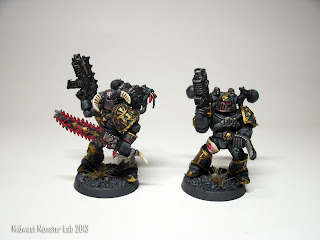 Many of the O.B. have hastily patched up wounds, like the marine on the right. 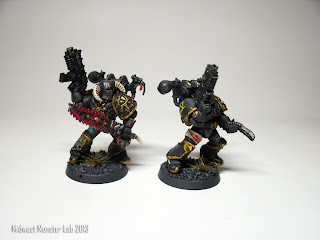 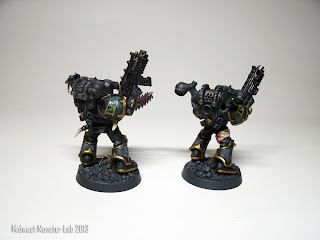 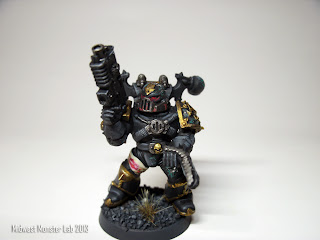 Check out the rust marring the bare metal portions of this guy's face plate. 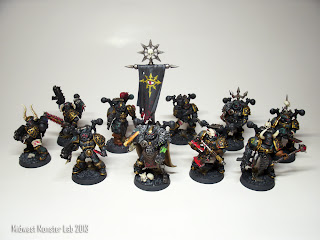 And with one last look at the whole squad, that's it!  Thank you for stopping by and checking out my latest project here at the Monster Lab.

Come back next time to see more!