I took a break from commissions this weekend to give myself an early Christmas present.  I bought the Viktorias starter, Hired Swords, and sat down to paint the relic hammer wielding, beer chugging, insult slinging mercenary warrioress Taelor.  The Taelor mini comes in nine CAD rendered plastic cast pieces which are amazingly detailed.  Her pose transmits ideas of playfulness, power, and the far end of post adolescent awkwardness.  I love it.

Let's take a look at the finished painted piece! 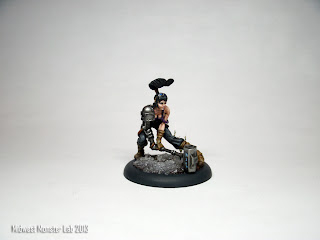 Taelor is going to be a guest-star in my Rasputina force, and as such, she got the same wet snow basing that I really like.  There's something attractive about the scantily clad Viktoria band questing through the winter snow, dealing out death with winks and smiles. 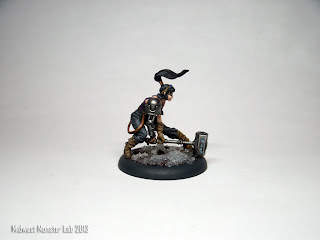 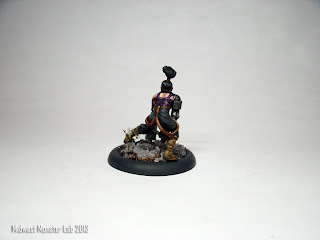 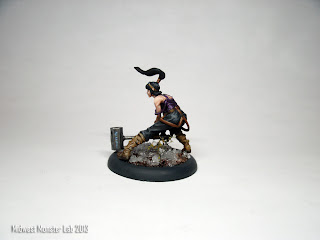 Where Rasputina was painted with the Reaper fair skin triad, Taelor's skin was painted with the rosy flesh triad.  She's definitely on the hot-blooded end of the personality spectrum and I imagine her becoming flush in the cold, steam rising off her while she swings away with her relic hammer, laying waste to her boss's enemies. 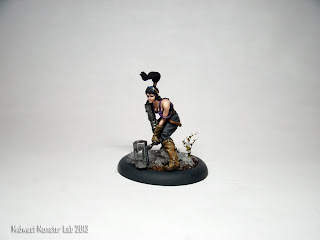 Each Malifaux model is CAD rendered from an illustrative artists concept, no hand sculpting is used.  I both like this and loath this concept because the models are of superb quality, but the time-honored relationship between tabletop games and their sculptors is potentially going to the wayside.  I have mixed feelings that the future of hobby lies with a computer mouse rather than sculpting tool.  Still, if anything, the quality of the minis speak for themselves, and I'll admit I'm a fan. 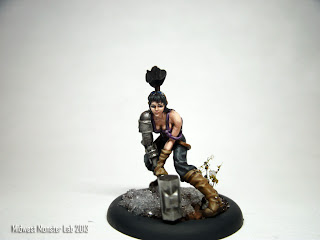 I would have preferred Taelor's mouth to be open in a sneer or yell instead of stoically pursed.  Still, her heart-shaped face is still wonderfully done, and has great potential for expression. 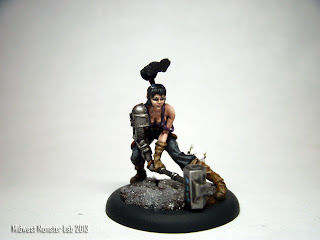 And that's it, Taelor is ready to battle it out for Rasputina's crew in my next Malifaux game!  Thanks for stopping by and checking out my work.  From me and Taelor, Merry Christmas! 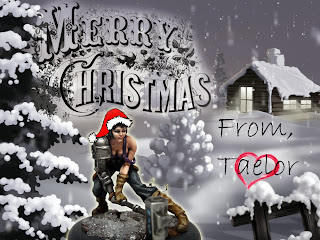