This week a model very special to me is finally receiving the hobby showcase he deserves, Kairos Fateweaver! 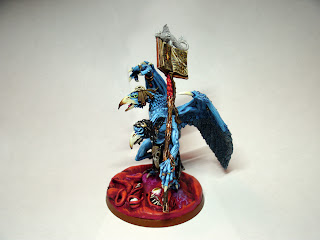 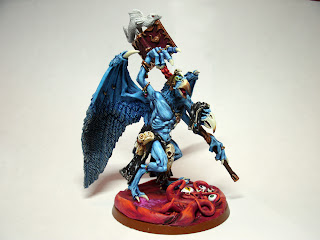 Kairos is standing on a custom sculpted warp base I made to fit into a display board for my 40k demon army.  He's very blue and the base is very red, so to ease the transition between model and base I painted purple/blue swirls emanating from his feet... his latent magical power bleeding off if you will.

The fiction behind Kairos says that one of his heads sees only the future and the other only sees the past.  The sculpt gave a strong sense of which of the two each head was, so I furthered that by painting the taller and more energetic one to be more vibrant.  From the war-like cap he's wearing to his colorful beak and glowing eyes, everything about the head points to him being virile.  The lower head on the other hand has a bleached and weathered beak and his dim eyes are almost completely inky black.  A start contrast to its counterpart. 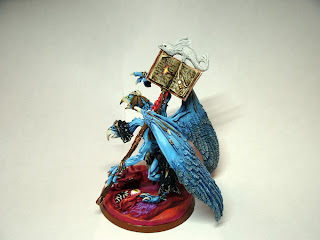 I took inspiration for the look of the writing inside Kairos's tome from the Lord of the Rings elvish script, very long and angular.  The nasty chaos energy contained within his grimoire is so potent it's literally burning its way out!

There's tons of details on the model that have little bits of significance, like the fish on top of Kairos's book.  When I was running a campaign my buddy Dave insisted that I paint it white.  He was playing Blood Angels and he wanted Kairos to be the nemesis of his librarian, "he'll be like my Moby Dick," he said, "my librarian's white whale."  And that's how the fish became an albino! 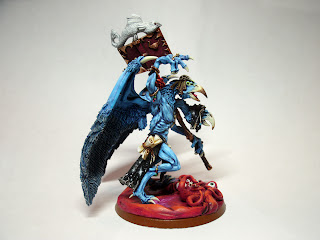 Kairos's cloth pieces have star fields glittering across them, among which are red, blue, yellow and white stars. 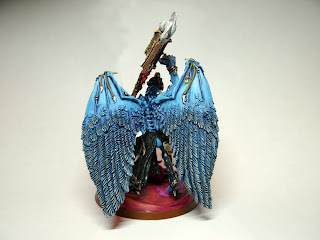 His wings, which don't look like a prominent piece, were one of the most time intensive parts of the model.  Each feather ridge has been painted individually with three highlights!

It's a huge relief to finally have Kairos done as he is the centerpiece and general of my Tzeentchian demon force and a main factor in every game he is a part of.  With one squad of horrors done and now Kairos himself, there's plenty more to do!