A GenCon Tale Part 5: Return of the Geeks

For those of you who have been traveling along with us on our journey to GenCon 2015 over the past month a half, it's finally time to pack up the paints, put away the cards, and load up all the minis and loot spirited away through the press of bodies in the vendor hall.  There were late nights of gaming, brews enjoyed at local pubs, and much slinging of spells; but now, sadly, it's time to return to the mundane world of nine to five employment, taxes, and an ultimate death of old age.

But not yet!  There's still one more day to enjoy the con (and the ripe old age of 120 is many many years away), so let's take one final look at all the awesome you can possibly pack into five days, one convention center, and a bunch of downtown bars.

Before we get started, I want to acknowledge the fun I've been having with the names of each of the five parts of the GenCon post (There and Back Again - A GenCon Tale, Wrath of the Con, The Convention Strikes Back, A Game of Tones, and The Return of the Geeks).

For added awesomeness, guess the name of the book/movie/etc. that inspired the name of each post, and look for the answers where they will be posted at the bottom of the page! (a special prize awaits)

As for convention pic farewell tour, let's pick back up with those that were only just good enough for the b-side of the greatest hits record, and we'll start with one of the first sights that greeted Donovan and I upon reaching the convention hall... 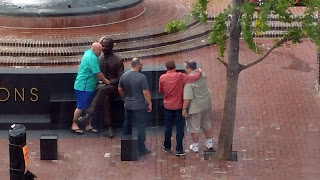 which would be the plight of bronze life-sized statues everywhere, and by which I mean a gaggle of drunk, middling aged men who have a penchant for molesting these vulnerable works of art.  This statue in the adjoining courtyard was no exception, simply minding its own business, the siren song of its captive nature and lack of foreseeable repercussions, led to its imagined crotch being massaged in a very unbrotherly like manner.  Bravo gentlemen, you just joined an elite club of scholarly intellectuals who pride themselves on their unique brand of insightful humor that inspires as much as it impresses.  *Cue slow clap* 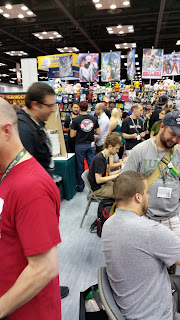 Miscellaneous shot of vendor hall booth area (it is, in fact, the Plaid Hat booth, but yeah).  Bonus points if you can find and name the celebrity in the background! 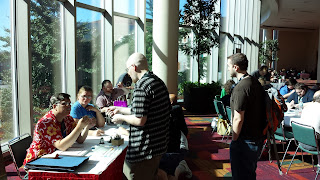 GenCon is epitomized by waiting in line.  I am 99.99% more willing to wait in line for something as awesome as a game demo/purchase or a chance at miniature painting glory.  Donny, I believe, feels the same.. 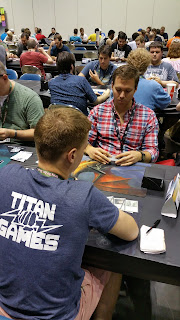 I competed in three Magic tournaments throughout the weekend.  This one lasted until well after 2am, where I placed third.  Legacy reanimator for life!!  If you're going to play powerful spells they might as well be roided out demons, massive angelic protectors, and minions whose affections are disproportionately two-sided. 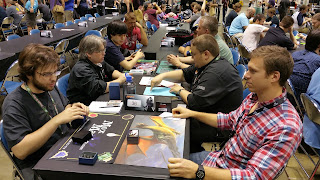 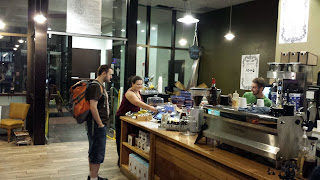 Bee Coffee Roasters across Capitol Street from the Convention Center stayed open 24 hours to ensnare the business of gamers ending their late nights of dungeon crawling.  Beware the turkey wraps that have dissolved in their own juices and gone the way of homogeneous goo, and plastic forks that WILL attempt to slay you. 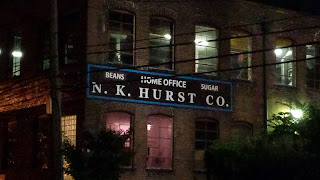 Wandering back to our car we came upon this sign.  "They sells beans, home office furniture, and sugar?"  I asked incredulously.  Of course they do, Matt, nothing quite goes with a comfy chair like copious amounts of carbohydrates and delicious simple sugars. 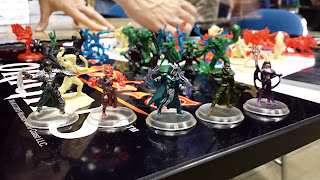 Wizards of the Coast is putting out a pre-painted strategy board game!  Woo-hoo! 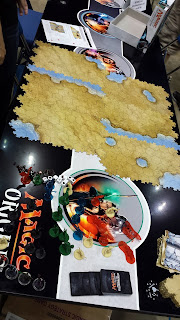 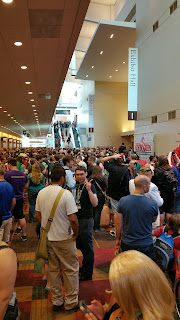 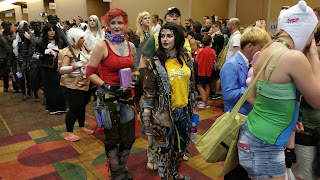 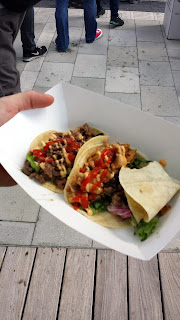 Delicious Korean tacos!  The BBQ steak was delicious and the spicy mayo was further enhanced by lots of Siracha sauce! 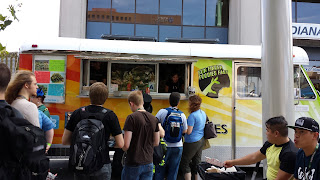 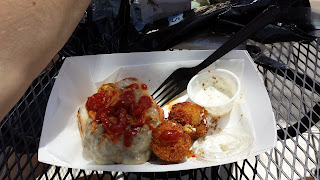 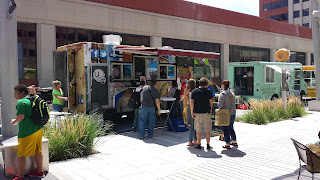 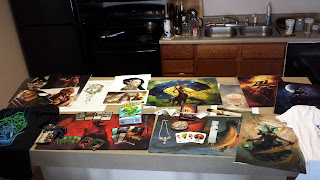 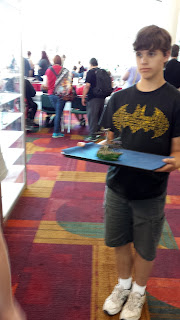 When I started this tale I knew I wanted to finish with the image of a polite young lad who kindly ferried our MHE entries from the display case to the check-out table.  It was the end of our Indy odyssey and a fitting end to the blog series as well.

I will admit that I couldn't help imagining him dressed like this the entire time he stood at attention... 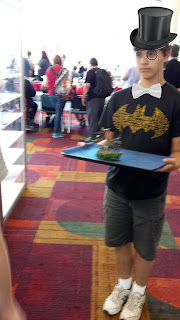 And as for the answers to the challenges posed above, they are:

+1 point - The celebrity in the background of the Plaid Hat Booth - Wil Wheaton!

If you guessed all five names correct, nice job!  Here's your prize!  If you got the bonus question correct, here's your very special prize!