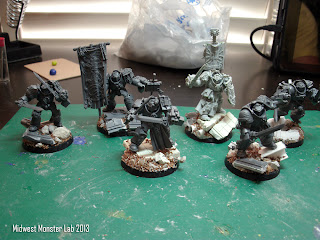 I'm back to work this week and have a squad of Grey Knight terminators and Lord Driago on my desk.

This is a commission piece at the showcase level of painting (level 2) and I wanted to do some great scenic bases to match.  Ruined cityscape is always a good basing choice for the armies of the 41st millennium and even more so for the Grey Knights.  Whether they are coming in as a MIB style clean-up crew to purge the heretic and alien or be they battling across a ravaged city-hive fighting to the heart of a demonic invasion, city bases look great and give that extra umph to Grey Knight models.

Let's take a look at some of the bases and break-down how they were made. 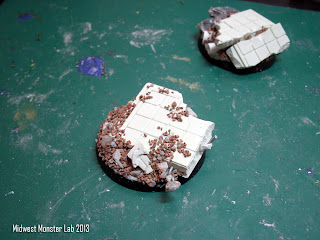 Each basing was built on a foundation of Apoxie Sculpt, a great modeling apoxie ideal for large projects that need a lot of coverage.  Apoxie Sculpt is also much easier to spread and shape than green stuff and can be easily carved after curing.  I purchased the white apoxie kit, although tons of colors are available from Aves.

I began by mixing a portion of the two part Apoxie and applied it to the center of the base in a clump.  With a broad modeling tool I smoothed it across the remainder of the base and then pressed broken pieces of the cities of death boxed set floor tiles (I don't think they make it anymore..) and rocks into it.  I also bent and then pinned brass rods into the sides of the tile piece to look like broken rebar. The whole thing is finished by brushing on white glue (Elmer's) and then applying Woodland Scenics fine and medium ballast to bring together the rocky debris. 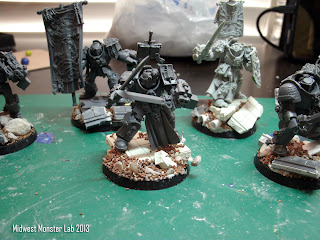 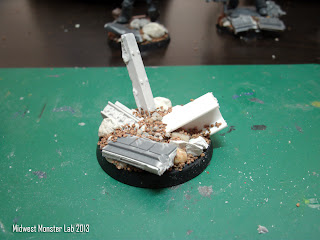 For this piece I cut a section from a Plastruct I-beam and set it into the Apoxie Sculpt. 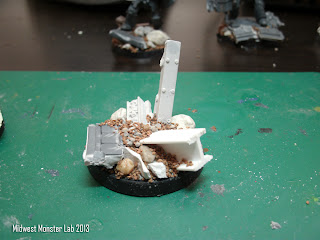 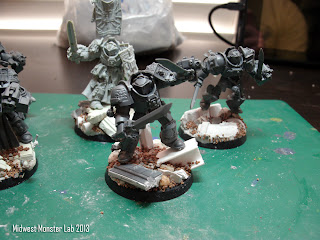 When I was building the bases I tried to keep the figures I had built in mind, but for the most part, I made bases that I thought would look cool and then matched the Grey Knight who would look best on a base to that one.  There's just something that's super cool about this guy, he looks like a G.K. ninja about to lay the smack down! 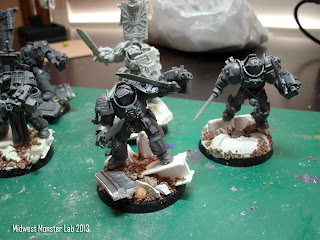 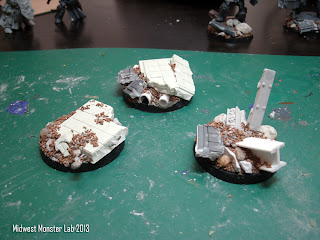 Plastruct cylindrical tubing makes ideal pipes.  The base at the rear of this group has an assortment of small, medium and large tubes jutting out from the ruined tile above it.  The tile also has fractured pieces hanging off its side, supported by the rebar between them. 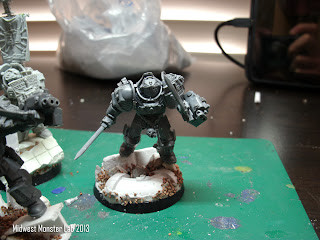 Another of my favorites, this G.K. has a strong sense of forward motion. I wanted to place him on a base that paired well with his posing and ended up on this one.  He's coming down from a higher vantage point on the base looking almost like he's jumping, but definitely about to bring the Emperor's justice to some heretic/alien scum/demonic menace. 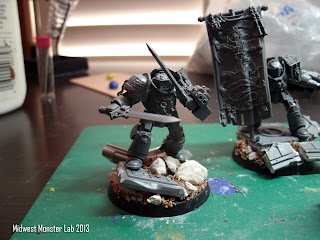 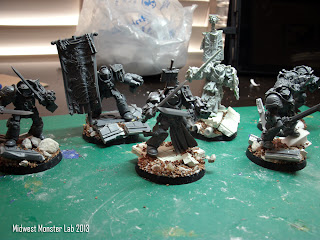 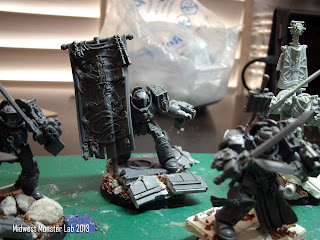 I don't get to do space marines often, and I have to say, the work so far on this commission has been refreshing.  I'm looking forward to getting some paint on these guys and think I might try my hand at a non-metallic metal scheme instead of the classic blue-silver.  I really want these guys to shine on the table top and have been pretty happy with the pale armor I've done on a past commission.

Thanks for stopping by and checking out what's on my desk!  Come back next week to see what other projects I'm working on here at the Monster Lab!