A couple of days ago, I had the opportunity to sit down with John Vas and take a close look at his Grey Knights. 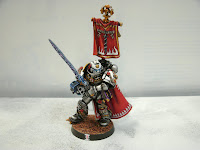 John is definitely lavishing on the details for his Grey Knights, and  nowhere is his keen eye more apparent than on his Castellan Crowe. 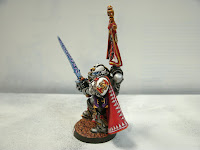 Crowe has a painstakingly embroidered cloak which features a pencil thin border and dagger motif. 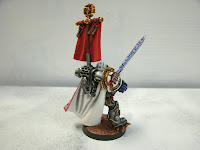 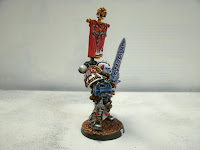 It's with Crowe's sword that John really stepped out of the box and pushed himself, here he is to explain how he went about painting it, "the fluff behind Gerran Crowe's sword is that it is demonic and that only he can wield it, so to represent that, I wanted to give it a shimmering effect.  What I did was put down a base of Dheneb Stone, then a layer of Skull White, making sure it was nice and bright.  Next I used the Asurmen Blue wash.  In the sword there's a lot of grooves, rune writing, and I had to go over it three times with the wash, dribbling the wash into the grooves, letting it dry, then doing it again until it was really dark.  After that I went with the Warlock Purple and stippled around the edges of the runes and then further out from that with the Enchanted Blue, doing all of that before taking white again and lightly brushing it on the very inside of each rune's edge to give the sword the feeling of contained power." 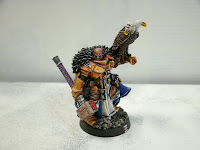 With non-metallic metals sweeping the hobby scene, John is sticking with metallic paints, and to great effect. His Inquisitor Coteaz is a prime example off his skill at building depth and highlighting with metallics. 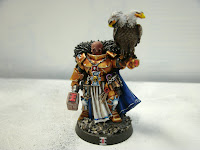 "I start with Calthan Brown, you should always basecoat with a brown for golds, then a layer of Dwarf Bronze.  Next I apply shining gold, which is great because it's pretty translucent and the bronze underneath
shows through and gives it more depth.  After that I wash with Gryphonne Sepia and then I go back over with a Shining Gold highlight and tip highlight with Burnished Gold.  On some of the weapons I took a fifty-fifty mix of Burnished Gold with white and hit edges with that." 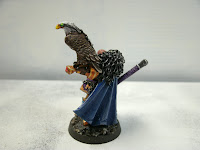 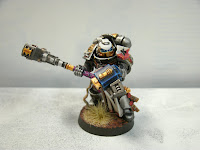 To do his silver metallics John said, "I use all three metallics, first thing I do is put down a basecoat of Boltgun Metal, then wash with Badab Black, and then I will go over the raised edges with Boltgun again.  The next highlight I use is Chainmail and then Mithril Silver on the highest points." 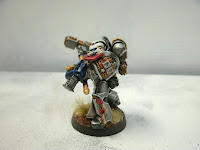 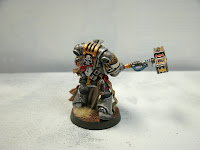 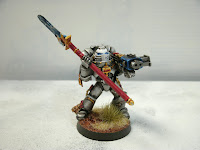 To get super crisp whites John says he'll, "lay down a basecoat of Dheneb Stone, after that I wash with Badab Black, any time I want to achieve the shadow effect, I wash with black. After that I'll bring it back up with a watered down layer of Dheneb Stone and then I start building that up with white.  The thing about whites is that you have to be careful not to get it too thick, you'll want to thin it down to about the consistency of 2% milk and put it on in layers.  What you want to avoid is glumpy streaks, so apply a thin layer, and let it dry before applying another."

John is a big fan of wet palettes and after reading August's post about how to build your own, he was sold.  When talking about getting thin, even layers of white he pointed to his homemade wet palette and said, "this white right here, I've had it for two weeks." 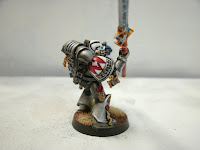 Being an academic of sorts, John doesn't simply sit down and paint a model, he looks into the narrative of his army for story elements and character pieces to make each model unique and authentic.  Speaking on the matter, John explains the heraldry of the Grey Knights, "each Grey Knight is allowed to have their personal heraldry on their right shoulder pad, though Purifiers do this, their heraldry always incorporates a flame." 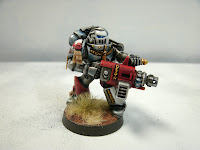 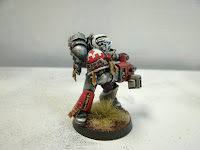 To better represent the Grey Knight's fiction, John has given each Purifier a unique heraldric pauldron with their trademark flame motif. 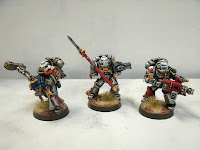 To date, John has three Purifiers completely finished, though he intends to get a full squad of ten completed before moving onto Strike Squads, Storm Ravens, and Rhinos. 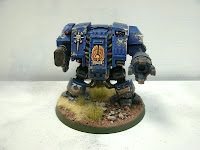 John's collection of space marines isn't limited to the guardians of Titan, he has also been painting up a set of marines from the Assault on Black Reach starter set for promo games at our local store. 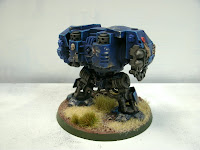 Little things, like the weathering of the dreadnought's paint job and the thin layer of dust covering its legs are touches that make John's models stand out. 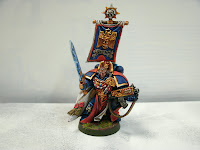 His space marine Captain is lavishly embellished, note the coruscating energy on the model's power sword. 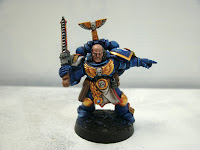 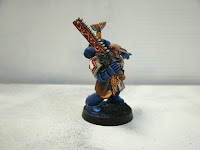 Even on a model as humble as a sergeant with a chain sword, John added extra touches like scroll-work to give the model extra pop. 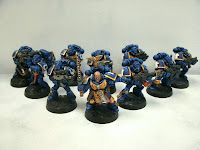 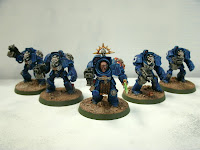 On his terminators, John didn't make white the base, but rather cleverly Dheneb Stone.  In this way, there is a huge amount of depth to each terminator's helmet with white as the top highlight. 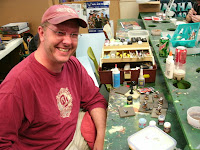 And here's the man himself, busy at work on his latest project!

A big thanks to John for sitting down and running through his models with for me, they're looking great!
Posted by Matthew Ochs at 4:48 PM